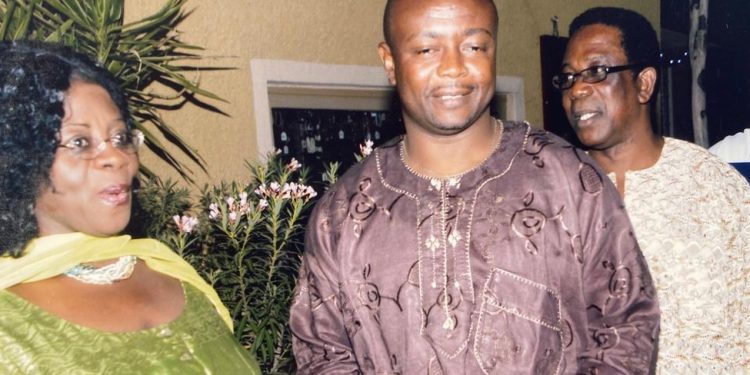 As we warm-up for the AFCON in Cameroun in the coming weeks,  let me remind one and all about highlights of the Continental tournament hosted by Ghana, CAN 2008: the only time Ghana has hosted the great event.

And what did CAN 2008 have to do with this Yankah variant? Unbeknownst to the younger breed of sports journalists, I was invited by the LOC to be Chairman of the Accra Venue Organizing Committee in January 2007, replacing Esuon Benjamin, who resigned to take on a national assignment.

Along all this, I was Pro-VC at Legon, and also Chairman of the Board of New Times Corporation, happily working with Nana Banyin Pratt, the great Editor (may he Rest in Peace). Somehow, ‘Ghanaian Times’ conspired, and persuaded me to be short-term columnist, years after my exciting ventures with Mirror, Uhuru, Catholic Standard, etc. I

In the next two segments or so, I reproduce parts of my writing adventures on CAN 2008, originally published by Ghanaian Times in 2007. Let’s begin with my adventures with Abedi Pele in Namibia, preparing for the 2008 tournament in Accra.

Namibia. I had never been there, but for an opportunity presented last week by the LOC of GHANA 2008. Going on the journey, I hemmed and hawed and snarled, considering that I was going to miss the Meteors match with Nigeria in Accra. Then also, the kick off of the 4 Nation Tournament. Was it going to be missed?

But how did I get into soccer? Almost accidentally? Not being a great player myself, I remember school days when try as I did, I never succeeded in making school teams. But my good friend Ato Austin did. We played together on the sandy beaches of Winneba, often staying behind at the close of school to indulge ourselves. His father an education officer, my father a school master at Zion. We met again at Sarbah Hall, Legon, where through athletics I ended up as sports secretary. Ato of course was a better soccer player. Occasionally though soccer captains mistook my skills in athletics for nimbleness of foot, and tried me on the soccer pitch. Students of Sarbah Hall would tell you that whenever I was accidentally featured, I mistook the soccer pitch for an athletics oval, and often outpaced the ball, leaving it bouncing behind me. For which reason it was always a risk passing balls to me. I would quickly switch into a baton changing mode, and dash to finish the race to the annoyance of goal hungry spectators.

Gradually however, my inner sport has started kindling again. This time, happily for soccer fans, I am operating from the Ohene Djan touchline.

Namibia had qualified for Ghana 2008. Fortunately or unfortunately, the mid-October draw at the Conference Centre put them in Group A with Ghana. Their home turf will be Accra. The mission of joining a three-man delegation to boost the tournament in Namibia was received with mixed feelings; but when Motherland calls, what are the alternatives?

Traveling together with Maestro Abedi Pele was a joy, but so was it teaming up with Riks Brobby, Deputy Chief Operating Officer (Operations) representing LOC Chairman. The GFA Boss Kwesi Nyantekyi could not make it due to the Meteors’ impending match with Nigeria.  My assignment of course was to sell Accra, the venue going to host  Namibia. Abedi was going as the Ambassador of Stanbic Bank, sponsors of the Ghana 2008 trophy tour. In our company, and under security cover was the magnificent trophy itself, on its way to boost the Games and tantalize Namibia.

The entire population of Namibia is less than half of Accra’s four and half million people. So then, is superiority in soccer measured in population size? The Chairman of Namibia Football Assocation, John Muinjo made a huge joke of it at a Gala Night organized for us by Stanbic at the Country Club Resort in Windhoek, the capital. In his remarks, Muinjo sizing up the two teams said, in spite of the sharp contrast in size and population, each country will be represented by eleven players only. It is not a question of Ghana’s 20 million ‘players’ locking horns with Namibia’s 1.8 million people. Each side, even if it included China, would consist of 11 players only. “But for all you know, we have an advantage over Ghana,” Muinjo’s voice boomed in the conference hall, “while Namibia will easily choose eleven players, there will be considerable confusion in the Ghanaian camp, choosing eleven players from over 20 million people, and that is why we shall beat Ghana.” The entire hall imploded with prolonged laughter.

The three-day trophy tour speaks volumes of the magic of soccer. The live presence of the 24 carat gold plated AFCON trophy, secured in the firm grip of Riks Brobby, pulled large crowds wherever it headed. The press conference we held at the Hotel was jammed by journalists, sports administrators, soccer fans, supporters’ union, past and present soccer players, that thronged the venue one hour before our arrival. Ponga Liwewe of Super Sport was there, and so was the NFA chair, Muinjo. The Acting Secretary General Barry Rukoro would not be left out. I met Dieter Widmann, who coached the Brave Warriors of Nambia in 1980 during the apartheid era.

We robbed shoulders with three proud players of the Namibia squad that took the Brave Warriors to Burkina Faso in 1998, when the country made its debut at Africa Cup: Lolito Gosareb, Danzyl, and Congo Hindjou. We appeared on various radio and TV stations. I remember KUDU  F. M., and One Africa TV. Brobby and Abedi were interviewed by  DSTV and Super Sports. We visited the State House and were all anxious to meet the President of Nambia, Hifikepunye Pohamba, who could not make it, and was represented by his Minister for Presidential Affairs. This was after we had visited Ghana’s High Commissioner in Namibia, to whom we presented the trophy.

But the news in Namibia was the Maestro, Abedi Pele who was virtually mobbed whichever direction he turned: at press conferences, reception by the Ghana High Commission, media houses, various branches of Stanbic in Windhoek, at Wernhill Mall, etc. This is besides a sports clinic Abedi held with Namibia kids. Long queues of Abedi fans stampeded to have autographs on soccer balls provided by Stanbic, on blouses, shirts, hats, books, bare skins. To all these requests, the Maestro coolly and calmly obliged an autograph. Ghana soccer had indeed penetrated the world.

As for the AFCON trophy, it is just as well it does not wear with human gaze and touch. Anybody who missed posing with the trophy, or taking a snapshot must have missed the opportunity of a life time. But sitting in a brand new BMW convertible Riks Brobby stern faced, gallantly held aloft the giant trophy in scorching heat, through central Windhoek. Police escorts led the convoy blaring sirens, followed by Abedi’s open car. Stanbic officials were in tow. Pedestrians stopped and stared, shoppers froze their movements, drivers peered. Namibian paparazzi hovered like houseflies, their digital cameras blinking in a frenzy. Mobile phone cameras clicked; amateur hands were at work quivering.

You could understand the crowd’s anxiety. It was hard to tell when next Namibia would see the trophy: perhaps in 2010. But it all depends on the fortunes of the Brave Warriors in Accra.  For all you know the Cup may end up in Namibia come February 2008. Namibia media consider last October’s tournament draw, where they were grouped in Group A with Ghana, a ‘tough draw’. But anywhere we went, we were reminded that the legendary Brave Warriors are noted for upsets, and notorious for spoiling good parties. They cite Burkina Faso 1998. When they were down 0 – 3  to Cote D’Ivoire in the first half, they pulled back to 3-3 in the second half, until they were finally downed 4-3 by the Elephants.

And listen to this. In preparing for Ghana, the Warriors met the Saudis recently and bowed 0-1 to them. Remember, it is the same Saudi Arabia that earlier humiliated Ghana with a  5-0 spanking.

The players to watch from Namibia? The captain Robert Nauseb and the Brothers Risser: Wilko Risser and Oliver Risser have been playing professional soccer in Germany. Oliver recently made his international debut and performed creditably in Windhoek. Their coach is Ben Bamfuchile. The Brave Warriors recently shot up in FIFA world rankings to 101, and are placed 25th in Africa. They indeed look forward to competing in FIFA World Cup.

Remember, Namibia this November inaugurated their 200-strong National Supporters Club. Led this time by a Ghanaian resident in Windhoek, they plan to storm Ghana in January 2008. Watch out for their slogan: ‘Ghana Here we Come.’

Accra should stand by for a beautiful and friendly people. But we should also watch out  for friends who don’t joke with good meals. As a hint, let me say Namibians like their meat in large jumbo chunks. Their Prime Minister told me in the queue at the buffet dinner. “We like meat a lot, and that is why everybody here has gout,” his sense of humour glowed.

On our part we told Namibia about ongoing preparations: security, stadia, training pitches, accommodation, etc. Of course, the Chairman of Namibia Football Association did not hide his disappointment that the training pitches were not ready in October, when he visited. But we boldly briefed gatherings and the media about the preparedness of Accra to host Namibia with open arms: beautiful hotels, nice cuisine, tourist attractions and all. I said all this and finally dropped the bombshell: “Accra is certainly the cleanest city in West Africa.”

I looked over my shoulders.