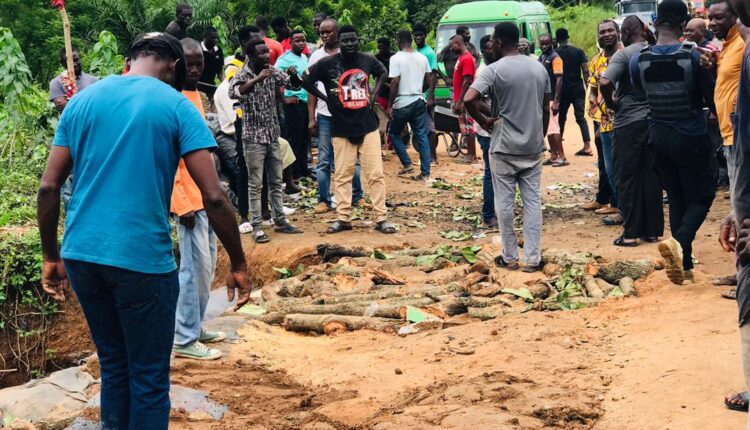 Holidays are meant to be enjoyed with family and friends, but the people of Donkorkrom in the Kwahu Afram Plains in the Eastern Region decided to use 21 September 2022, a day set aside to commemorate Ghana’s first president, Dr Kwame Nkrumah, to fix unmotorable roads in the town.

According to the residents, they had complained about the poor nature of the roads to the  District Chief Executive (DCE) for Kwahu Afram Plains, Nana Isaac Ofori Koree, on several occasions.

But nothing has been done to address the situation.

They were worried that the poor nature of the roads has affected healthcare delivery and economic activities.

They cited numerous potholes that have developed on the roads over the years that make it difficult for smooth movement, sometimes resulting in fatal accidents as drivers try to dodge.

Commercial transport operators, including motorbike riders, popularly known as “Okada”, also complained that due to the poor state of the road, they always have to spend huge sums of money after visiting mechanic shops to repair their vehicles.

Adding that cost and the continuous increment of fuel prices makes them run at a loss after the daily, weekly or monthly sales.

The residents, including drivers from different locations, filled the potholes with sizeable stones, pieces of wood, sand and other solid materials to help the situation.

They also raised concerns about security and constant roadside attacks by armed robbers.

After the exercise, they pleaded with the government to come to their aid to fix the roads to fulfil the government’s ‘Year of Roads’ promise made by the Akufo-Addo administration.

2 Perish in fire outbreak at Ahiatsikope