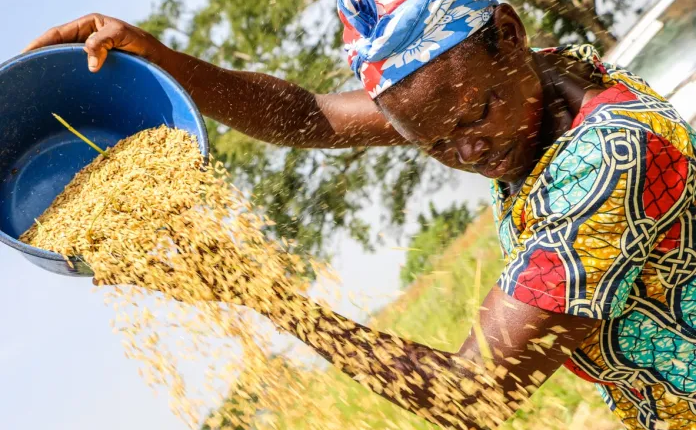 But post-harvest losses persist
Rice farmers in the Builsa North and Kassena Nankana Municipality of the Upper East Region have recorded bumper harvests following rehabilitation of the spillway channel and ancillary works at the Tono Irrigation Scheme.

The farmers have seen good yields and are expecting to harvest more than 5 tonnes of rice per hectare of 1,800 hectares.

The 3.147 kilometre-long dam constructed across the Tono River has created a reservoir covering 1,860 hectares, with a maximum capacity of 93 million cubic metres of water. This has helped the farmers to access efficient utilisation of water to produce more rice to meet demands of the growing population.

The scheme, which is powered by solar, ensures regular operations and enables farmers to cultivate rice twice a year as compared to the previous years when they relied on rains for production.

The Tono scheme was established by government to promote the production of food crops by small scale farmers within an organised and managed irrigation scheme.

It has a gross area of 3,860 ha with a potential irrigable area of 2,680 ha – of which 2,490 ha has been developed. The source of water is the Tono River, and the scheme is managed by the Irrigation Company of Upper Region (ICOUR)

Statistics from the Irrigation Company of Upper East Region (ICOUR) indicate each farmer cultivating at least 10 acres with a population of about 2,5000 – with many women involved in the production.

It was observed that about five farming communities such as Chuchuliga zone T and P, Biu, Gaani and Bonia zone rely on one combine harvester and a storage facility for their activities.

Daniel Akansake, an agronomist and in-charge of the Irrigation Company of Upper East Region (ICOUR), said the rehabilitation has encouraged most of the youth to venture into rice production.

He said management has been supervising farmers with use of the tunnels and water resources available for their production to ensure value for money.

The issue of post-harvest losses

When the B&FT visited rice farms in the area, most crops were due for harvesting; but access to a combine harvester has been a challenge to the farmers.

They told the B&FT that delay in harvesting the rice resulted in destruction of the cereal by some birds; hence an increase in post-harvest losses.

Madam Juliana Adda, a farmer, said lack of storage facilitities has been compelling farmers to store the paddy rice in their homes.

“After harvesting, we have no option than to sell to aggregators at cheap prices to defray some of the cost of our production.

“If government could put us into associations or groups and support with farm inputs, tractors and combine harvesters at a reduced price, or make us contribute to pay with rice, it would be of help,” she said.

Anawo Kojo, a rice farmer, in an interview with the B&FT said market for the paddy continues to pose challenges because they had to either travel to Prigas Market or Kumasi before selling to get the investment injected into production.

He noted that a bag of the paddy rice has increased from GH¢300 to GH¢400 due to high input cost.

Another farmer, Asibi Agaba, also appealed for government to help form some groups and support them with the needed equipment to engage in their activities.