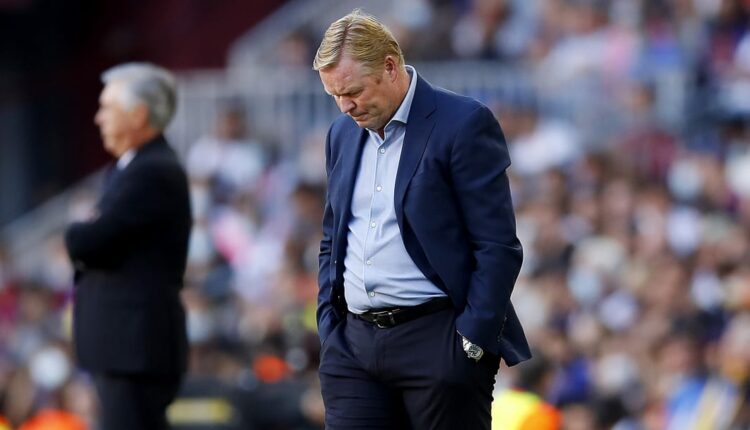 Ronald Koeman’s car was mobbed as the Barcelona manager attempted to leave Camp Nou after his side’s 2-1 Clasico defeat to Real Madrid on Sunday.

The chaotic scenes unfurled with a serious lack of security measures in place, with dozens of people able to surround the former Barça defender’s car.

Shouts of “out” were heard, while Koeman was also whistled at and one fan almost managed to climb on the hood of his car.

The club have released a statement on the incident, which reads: “FC Barcelona publicly condemns the violent and disdainful acts that our manager experienced when leaving the Camp Nou. The Club will take security and disciplinary measures so that such unfortunate events do not happen again.”

Barcelona have started the season poorly, with a La Liga title challenge not on the cards any time soon, and a number of players came in for criticism after the defeat to Real Madrid on Sunday. Frenkie de Jong, Oscar Mingueza and Sergino Dest were all poor throughout the game, with Koeman singling Dest out in particular for a crucial miss which he felt was pivotal in the game’s outcome.

He said: “We had a very clear chance to go 1-0 up and shortly afterwards Madrid took the lead. It’s a totally different game if we go ahead. You simply have to score such a clear opportunity.”

Goals from David Alaba and Lucas Vazquez gave Los Blancos the victory at Camp Nou, with Sergio Aguero’s first goal for Barça being little more than a late consolation.

Pressure still looms large on Koeman, with his side now five points behind Real who lead La Liga. They’re next in action on Wednesday when they visit Rayo Vallecano, who themselves are a point ahead of Barça.