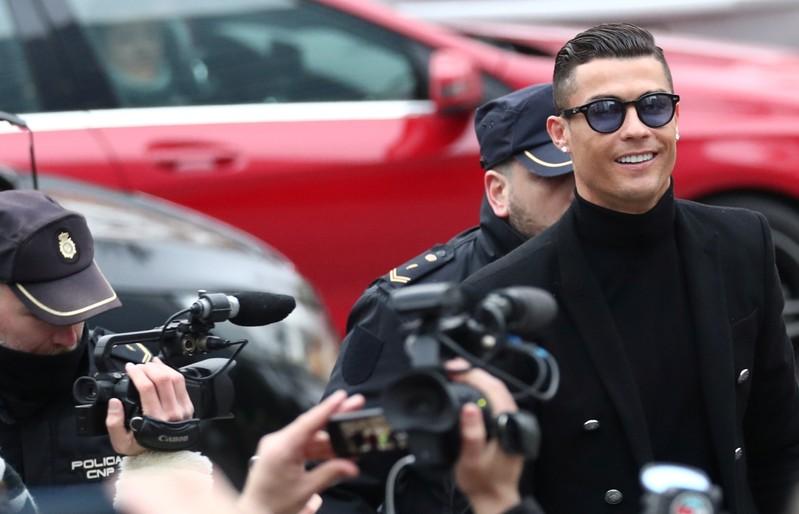 Football superstar Cristiano Ronaldo has cut a deal with a court in Madrid over tax evasion charges, accepting an €18.8m (£16.6m) fine.

A huge media presence met the player outside the court, after a judge refused his request to appear by video or to enter the building by car to avoid the spotlight.

The deal, agreed in advance, includes a 23-month jail sentence.

But in Spain, convicts do not usually do time for sentences under two years.

The non-violent nature of Ronaldo’s offence means he is unlikely to spend any time at all in jail, serving it on probation instead.

The current Juventus player, who played for the club in Italy the night before, arrived smiling and giving a thumbs-up, apparently unfazed by the media presence.

His lawyers had argued that given his fame, avoiding the main entrance was needed for the player’s security.

Journalist Ruben Canizares posted a video of the footballer arriving at the provincial court with his fiancee Georgina Rodriguez.

What are the allegations against Ronaldo?

Ronaldo, five-time winner of Europe’s Ballon d’Or and often titled one of the world’s best players, was accused of avoiding paying tax in Spain between 2010 and 2014, when he was playing for Real Madrid and based in the Spanish capital.

Forbes lists the 33-year-old as the third-wealthiest athlete in the world, with estimated earnings of $108m (€95m) a year.

The case centres around lucrative image rights deals. Prosecutors say the proceeds were funnelled through low-tax companies in foreign nations to avoid paying the required tax.

In court, as part of his deal, Ronaldo acknowledged four incidents amounting to €5.7m owed, according to Spanish-language news agency EFE.

In 2017, when the allegations first emerged, prosecutors said it was a “voluntary and conscious breach of his fiscal obligations in Spain”.

But Ronaldo’s lawyers said it is all down to a misunderstanding over what was and was not required under Spanish law, and deny any deliberate attempt to evade tax.

The deal, struck in June last year, had to be agreed with Spain’s tax authorities.

Ronaldo is not the only high-profile player to face the wrath of Spain’s tax system.

His former Real Madrid team-mate Xabi Alonso is expected to appear in court on the same day for the first time, charged with similar image rights offences amounting to about €2m.

The recent crackdown on high-profile footballers follows the removal of a tax exemption in 2010. Known as the “Beckham law”, it had allowed footballers to curb their taxes.

Ronaldo also faces another ongoing legal battle: the football superstar is accused of rape in Las Vegas in 2009, a charge which he denies.