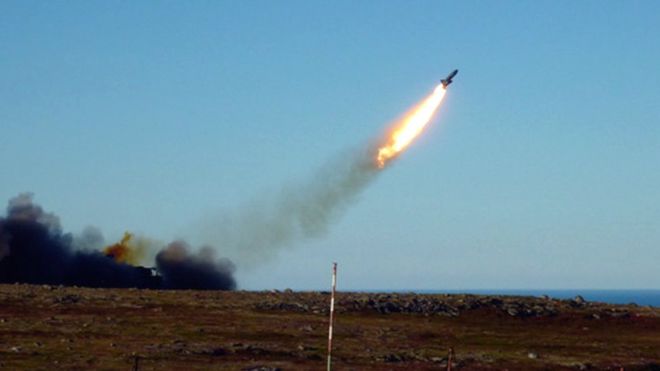 Rostacom said the accident occurred during tests on a liquid propellant rocket engine.

Authorities had previously said that two people died and six were injured in the blast at the site in Nyonoksa.

The company told Russian media that its engineering and technical team had been working on the “isotope power source” for the propulsion system.

The Nyonoksa site carries out tests for virtually every missile system used by the Russian navy, including sea-launched intercontinental ballistic missiles, cruise missiles and anti-aircraft missiles.

Authorities in Severodvink, 47km (29 miles) east of Nyonska said that radiation levels shortly after the blast were higher than normal for about 40 minutes but returned to normal.

Locals have rushed to buy medical iodine, with pharmacies’ stocks of iodine reported to be running out in the cities of Arkhangelsk and Severodvinsk.

The rush for iodine was reported earlier by a news website for the Arkhangelsk region, 29.ru.

It also said medics who evacuated the injured at Nyonoksa wore chemical and nuclear protection suits.

There was a rush on iodine stocks during the 1986 Chernobyl nuclear disaster in Ukraine, which sent a huge plume of radiation across Europe.

On Thursday the Severodvinsk administration reported a 40-minute spike in radiation, which reached 2 microsieverts per hour, then fell back to the normal 0.11 microsieverts. Both levels are too small to cause radiation sickness.

The administration has now deleted its statement online about the spike. The BBC asked officials there why, and they said “because this incident comes under the authority of the defence ministry”.

The defence ministry insisted that “there have been no harmful chemicals released into the atmosphere, the radiation levels are normal”.

It is the second accident involving Russia’s military this week.

On Monday, one person was killed and eight others were injured in a blaze at an ammunition dump in Siberia.

Flying munitions damaged a school and a kindergarten in the area. More than 9,500 people were evacuated.