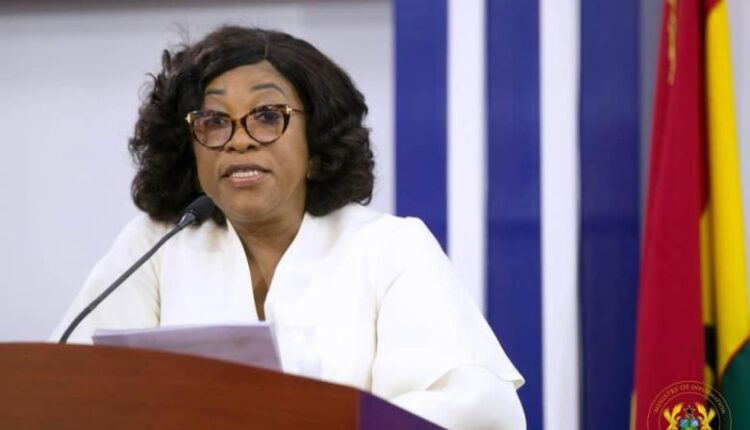 The government of Ghana has debunked claims of an attack by the Russian military on a train transporting Ghanaian students out of Ukraine.

Minister of Foreign Affairs and Regional Integration Shirley Ayorkor Botchwey said such reports should be ignored.

“We wish to use this platform to debunk the unsubstantiated reports, such as one alleging that a bus conveying some Ghanaians to the eastern part of Ukraine was shot at,” she stated on Sunday, February 27.

She entreated the public to “endeavour to steer clear of sensationalism and unconfirmed reports that only serve to heighten tensions at these times”.

She, however, assured that Ghana’s diplomatic missions in Bern, Ankara, Prague, Moscow, and the Vatican were working around the clock in a coordinated manner to secure the safety at all times of Ghanaian citizens and ensure a safe evacuation.

MP for North Tongu constituency, Samuel Okudzeto Ablakwa, had disclosed in an interview with TV3 on Saturday that some of the students go attacked but escaped unhurt as they made frantic efforts to flee Ukraine.

Mr Ablakwa, the ranking member of Parliament’s Foreign Affairs Committee, was speaking in relation to calls by Ghanaian students to be evacuated from Ukraine, following Russia’s invasion on Thursday.

Meanwhile, some Ghanaians who have been moved to neighbouring countries are expected to arrive in Ghana in the coming days.

“I am pleased to inform you that two hundred and twenty (220) of our compatriots have exited Ukraine and should be with us in Ghana soon. We are earnestly facilitating the safe return of a lot more,” Minister of Foreign Affairs and Regional Integration Shirley Ayorkor Botchwey disclosed.

She explained to the press that: “As at 12:00hrs GMT today (27th February), information gathered was that over four hundred and sixty (460) students had left Ukraine en route to Poland, Hungary, Romania, Slovakia and the Czech Republic.  The students will be received by officials of our Diplomatic Missions, honorary consuls and officials of the Ghana students’ associations”.

According to Ms Ayorkor Botchwey, 24 Ghanaians have arrived in Bucharest, Romania.

Ghanaians officials on the ground are procuring tickets for them to leave on Monday en route to Accra.

Also, 48 are being processed at the holding area, and another 60 are going through border formalities.

Furthermore, some 38 Ghanaians who crossed into Poland are with Ghanaian officials.

“We are currently also making arrangements for those who are willing to be assisted to get on flights,” Ms Ayorkor Botchwey noted.

Additionally, 25 persons en route to Prague from Slovakia have been assisted by the Ghanaian Consul and are expected to be received on entry by the Ghana Mission in Prague.

“Twenty-five (25) just this morning arrived in Hungary and are being sheltered at the Pentecostal church in Budapest. Eighty-Five (85) of our compatriots are being assisted by our Embassy in Moscow to cross the border town of Suny into Russia, which, as indicated earlier, has posed serious difficulties,” Ms Ayorkor Botchwey added.

She revealed that the government of Ghana had secured passage through Hungary on a visa-free basis for Ghanaian students who are in possession of Ghanaian passports.

“We are told the Hungarian government is also providing coordinated assistance to enable our nationals to reach airports in Budapest or Debrecen. The Government of Ghana is grateful to the Hungarian Government,” She stated.

Further interventions by the government include a request to five European countries bordering Ukraine (Moldova, Poland, Hungary, Romania and Slovakia) to facilitate easy passage into their countries by our compatriots.

“Fortunately, the government of Moldova has officially indicated its willingness to facilitate the passage of foreign nationals based on a structured exercise”.

Ms Ayorkor Botchwey explained that the government was using these options because of the closure of Ukrainian airspace.

Due to that, “it had become a challenge to airlift our compatriots from Kyiv and other parts of the country, thus, leaving the only viable option of evacuation by land”.

She explained that there were three (3) cities in Ukraine where students could not be evacuated due to the high-risk situation identified there.

Earlier, the National Union of Ghana Students (NUGS) confirmed in a Tweet that the first batch of Ghanaian students fleeing Ukraine had arrived in Romania.

The students who arrived safely in the neighbouring country will be catered for by the Romanian government.

We have confirmed very reliably that Ghanaian Students who were in the City of Chernivtsi-Ukraine have arrived safely in Romania 🇷🇴 and are being catered for by the government of Romania as per arrangements made by the @GhanaMFA . Train to Hungary safely on the move as well🙏🏻.

What is happening in Ukraine?

Russian forces have launched a military assault on neighbouring Ukraine, crossing its borders and bombing military targets near big cities.

In a televised address, Russia’s President, Vladimir Putin, reportedly ordered a “military operation” in Ukraine’s eastern Donbas region, but what’s been launched goes far further and amounts to a full-scale attack on the country.

Russian military vehicles were said to have breached the border in several places, in the north, south, and east, including from Belarus.

The Ukrainian president’s office says that more than 40 Ukrainian troops have been killed in Russian shelling, but this has not been independently confirmed.

The Ukrainian armed forces say they have shot down five Russian planes and a helicopter; however, Russia dismissed these claims.

Emergency sirens have sounded in Kyiv, and huge traffic jams have built up as residents flee the city.

Why has Russia attacked Ukraine?

There have been hostilities between Russia and Ukraine after the former became a sovereign state after breaking away from the Soviet Union.

However, in 2021, the situation escalated after Ukrainian President Volodymyr Zelenskyy expressed his desire to US President Joe Biden to approve admission to join NATO.

Russian President Vladimir Putin believes Ukraine is a puppet of the West and allowing a partnership with NATO will give the West access to set up military bases closer to Russia, which could facilitate an attack on Moscow.

Russia has demanded that the West gives a legally binding guarantee that NATO will not hold any military activity in eastern Europe and Ukraine.

Russia further wants Ukraine to desist from any NATO membership.

The new tension between Russia and Ukraine, which also borders the European Union, has political and economic repercussions for the EU.

Consequently, the EU, most of who are NATO signatories, have joined the US in announcing sanctions against Russian entities.