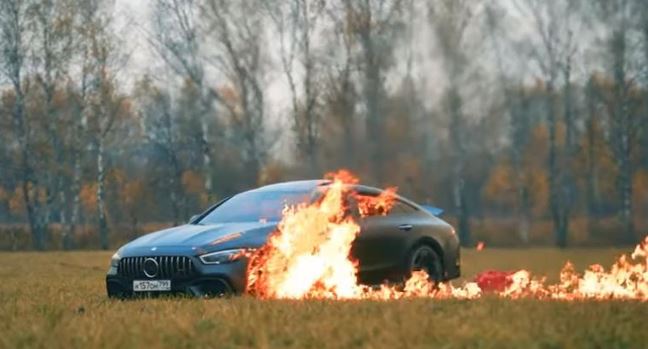 Russian influencer torches his Mercedes-AMG GT in protest against dealer

The idea of destroying an expensive car in protest against a dealer or car company is nothing new.

But while the weapon of choice is usually a sledgehammer or something similar, this Russian influencer decided that death by fire was the only way to calm his rage against Mercedes.

Mikhail Litvin, who has nearly five million YouTube subscribers, decided to torch his Mercedes-AMG 63 S 4-Door in a damp field, and the video that he recorded went viral over the weekend, attracting over eight million views by Monday.

In the video we see Mikhail dousing the car with petrol, then walking away to braai some sausages nearby – and his meat-tanning skills (or lack thereof) will probably infuriate South African viewers even more than his car-torching antics.

After burning the sausages, the influencer then attempts to light the trail of fuel that he left along the grass and after a few failed attempts he gets it right and the result is not something that any real car enthusiast wants to see.

As you’d expect, the video drew lots of criticism on social media for the sheer wastefulness of torching such an expensive car.

But why did he do it?

According to numerous media reports, Mikhail was unhappy with his local Mercedes dealer because the car had been in for repairs five times already, and had not been fixed to his satisfaction.

Either way, it seems an awful shame to see a shiny performance car like this go up in flames. Hopefully, he’ll be happier with his next purchase.