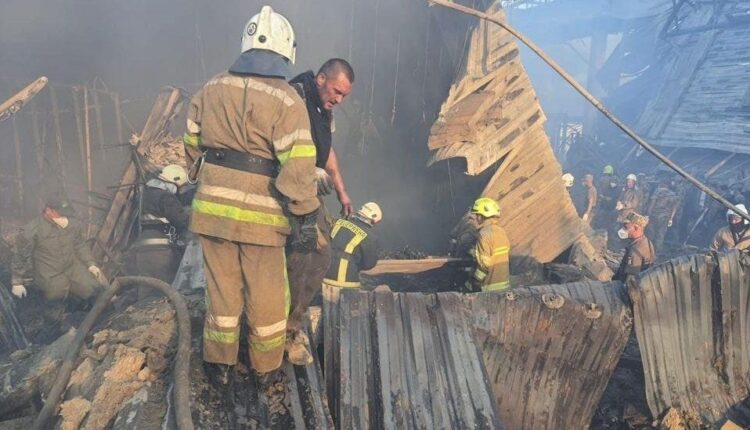 At least 16 people have died in a missile strike on a shopping centre in the Ukrainian city of Kremenchuk.

Some 1,000 civilians were estimated to be inside the busy mall at the time of the attack at around 15:50 (12:50 GMT), President Volodymyr Zelensky said.

The leaders of the G7 group of richest nations – who are meeting in Germany – condemned the attack as “abominable”.

“Indiscriminate attacks on innocent civilians constitute a war crime,” they said in a joint statement.

Russia has been blamed for the attack, which also injured at least 59 people, and there are fears the death toll will continue to rise.

Pictures online showed the building engulfed in flames and thick black smoke billowing into the sky.

“A crime against humanity. This is an obvious and cynical act of terror against the civilian population,” the local governor Dmytro Lunin wrote on Telegram, also calling it a “war crime”.

Ukraine’s State Emergency Service, which gave updates on the death and injury toll, said 57 units were involved in battling the flames. Photos posted on its Telegram page show the blackened and charred shell of the building with the roof caved in.

In one video taken shortly after the strike a man can be heard calling out: “Is anybody alive… anybody alive?” Soon after ambulances arrived to take the injured to hospital.

But there are still people missing, and as night fell, family members gathered at a hotel over the road, where rescue crews have set up a base, to wait for any news. Lights and generators have been brought to the site so crews can continue the search overnight, Reuters news agency reports.

The central-eastern city of Kremenchuk is located about 130km (81 miles) from Russian areas of control.

President Zelensky said the mall had no strategic value to Russia, and was no danger to its occupying forces – “only the attempt of people to live a normal life, which so angers the occupiers”.

He described the attack as one of the “most brazen terrorist acts in European history”.