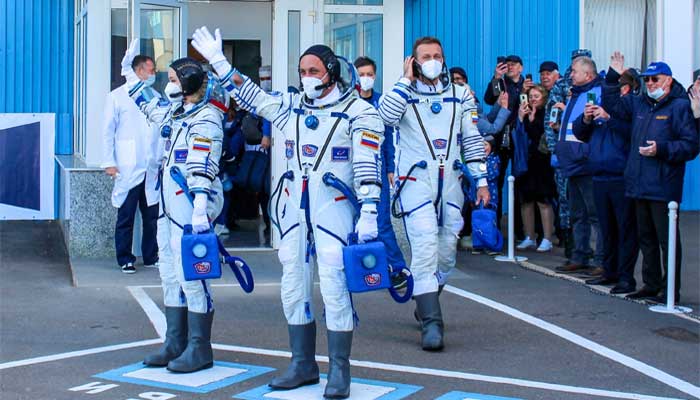 A Russian film crew are back on Earth after wrapping up scenes for the first movie shot in space.

Klim Shipenko and actor Yulia Peresild left the International Space Station and landed in Kazakhstan – to be met by a crew filming touchdown scenes.

The ISS shooting was not without drama – suitable for a film called Challenge.

On Friday the ISS unexpectedly tilted after a glitch in its thrusters, pausing filming. It was not thought to be part of the script.

In a farewell tweet from the ISS, Peresild showed off a weightless hairdo likely to thwart any conspiracy theorists who think it was all shot on Earth:

A Russian trio said farewell to the station crew and closed the Soyuz MS-18 crew ship hatch at 4:41pm ET today. They undock at 9:14pm this evening. More… https://t.co/Hwwr4AEUI7 pic.twitter.com/aXFOtG2H1O

The movie has been in its own kind of space race – with Tom Cruise. He is apparently part of a Hollywood filming-in-space project involving Nasa and Elon Musk’s SpaceX.

The module carrying Peresild and Shipenko, along with cosmonaut Oleg Novitskiy, parachuted down to Earth at about lunchtime on Sunday in the Kazakhstan steppe.

Their departure was not delayed by Friday’s glitch, which resulted in lost positioning control for about half an hour.

It wasn’t the film crew’s only close encounter with tech breakdown. On arrival on 5 October, the Soyuz’s automatic Kurs docking system failed and the commander had to switch to manual control.

The actor and director will now be taken to Russia’s Star City training base for a 10-day rehab, which is two days less than their actual space stay.

The plot of Challenge has not been detailed, but the section in the ISS appears to be that of a doctor – Peresild’s character – operating on a sick cosmonaut (Novitskiy, in a cameo role) whose medical condition means he cannot be treated on Earth.

The feature film is the brainchild of the head of space agency Roscosmos, who at one point fired the head of crewed missions in a row over the project.

Sergei Krikalev, a veteran of space missions, got his job back days later amid widespread anger at his sacking.