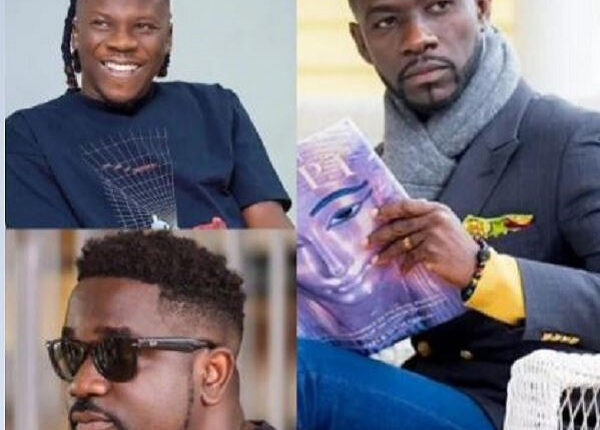 Sarkodie, Okyeame Kwame and Stonebwoy have come together to perform at the 72nd birthday celebration of the Asantehene, Otumfuo Osei Tutu II at Memphis in the United States of America (USA) on May 6, 2022.

Otumfuo Osei Tutu is billed to participate in the 2022 ‘Memphis in May International Festival’ which is devoted to honouring the culture and heritage of Ghana, from May 3 to 9, 2022.

A special event, known as the Black Star Black Tie Gala, will be held in the city on May 6 to celebrate Otumfuo’s 72nd birthday and the artistes, including Michael Owusu Addo, known in showbiz as Sarkodie; Kwame Nsiah-Apau, known professionally as Okyeame Kwame, and Livingstone Etse Satekla, better known as Stonebwoy, will stage a concert to celebrate the King on the day.

The performance is being facilitated by the E ON 3 Group, KGL Group and KGL Foundation.

Last Monday, the Executive Chairman of E ON 3 Group, Richard Adjei Mensah Ofori-Atta, led Sarkodie and Okyeame Kwame to the Manhyia Palace to officially inform Otumfuo of the decision to honour him with a performance in the US.

Also at the palace were the Founder and Executive Chairman of GLICO Group, Kwame Acheampong-Kyei, and the Managing Director of the State Housing Company (SHC), Kwabena Ampofo Appiah.

“Your grandchildren have decided to make your birthday a grand one and have, therefore, decided to perform in Memphis,” he told Otumfuo.

He indicated that the artistes would ensure that the birthday celebration was worth it.

On GLICO, Mr Ofori-Atta said the company had insured the Otumfuo Commemorative Gold Coin that were being sent from Ghana for presentation to the City of Memphis and the organisers of the festival.

SHC will also use the festival to seek for foreign investment in Ghana’s housing sector.

In response, Otumfuo thanked the artistes for the honour.

He said over the years, Sarkodie and Okyeame Kwame had shown interest in his activities and added that he appreciated what they have been doing.

The Asantehene also thanked GLICO and SHC for the support.

He said everything that they were doing was to enhance the image of Asanteman and Ghana.