This was part of a set of new guidelines to regulate the sector and ensure investor confidence after years of poor regulation, leading to the collapse of several scores of financial service institutions.

SEC stated that the new move is in accordance with Section 209 of the Securities Industry Act 2016, (Act 929).

The huge upward revision would be the first since the Securities and Exchange Commission Regulations, 2003 (LI 1728) was passed.

All players are supposed to abide by the directives by December 31, 2021.

Existing operators have until the deadline date to meet the requirements while new applicants will have to comply before a green light by the regulator for them to operate. 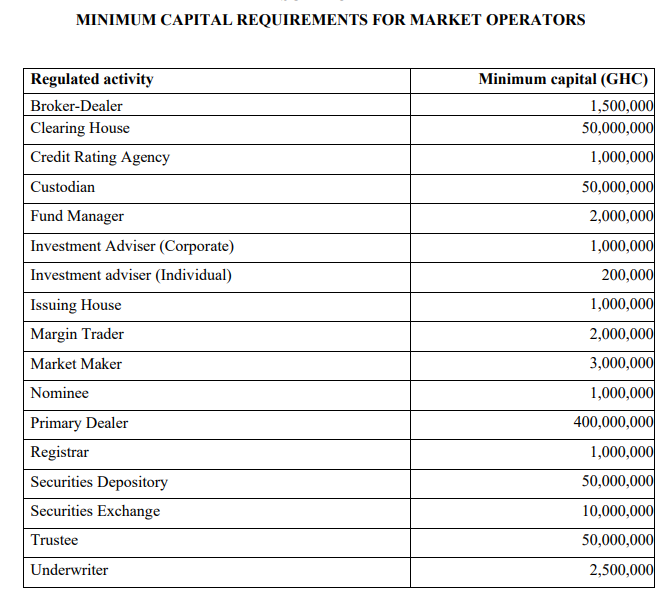 Director-General of the SEC, Daniel Ogbarmey Tetteh had lamented in an interview with Bloomberg in 2019 that the capital requirement was too minimal.

“Some who will not be able to meet that capital will have to fall out,” he said. “If you are a fund manager you must keep to the obligations in the contract with your clients. You signed an investment contract to do ABC — just stick to it.”

The sanitization of the financial markets follows that of the banking sector where a minimum capital requirement of GHC 400m was introduced by the end of 2019.

SEC, explained that the revocation follows the companies’ failure to “return client funds which remain locked up and in a number of cases, have even folded up their operations.”

“Essentially, they have failed to perform their functions efficiently, honestly and fairly and in some cases are in continuing breach of the requirements under relevant securities laws, rules or conditions, despite opportunities provided to them by the SEC within a reasonable period of time to resolve all regulatory breaches. The SEC has concluded after extensive engagement with these institutions that their continuous existence in the light of their conduct poses severe risks to the stability of the capital market and to the interests of investors,” the regulator indicated.

The Registrar of Companies has already acquired a court order to liquidate some of the companies with clients expected to receive their locked-up funds in October 2020.

Prior to this action, about nine commercial banks went under for failing to meet the new requirements and other guidelines spelt out by the apex bank.

The central bank also revoked the licences of 347 microfinance companies as well as some 23 finance houses and savings and loans firms.

The action of the regulators is to strong banking and financial sector to support the growth of the economy.

Gold to continue rally regardless of US election outcome – Analysts

NPP has 11% urge over NDC on realistic promises; 10% advantage on delivery – CDD Survey