Diop, a rugged midfielder who played for Fulham and Portsmouth, passed at aged 42 after a long illness, FIFA has confirmed.

FIFA is saddened to learn of the passing of Senegal legend Papa Bouba Diop.

Then a 24-year old, the midfielder rose to prominence at the 2002 World Cup, scoring the opening goal of the tournament as Senegal shocked reigning champions France in a famous 1-0 victory. 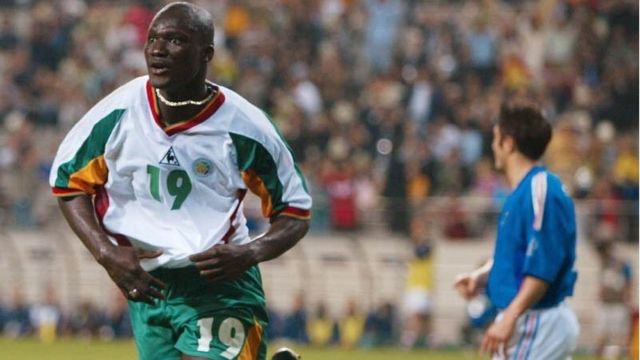 Diop grew up in the Senegalese capital, Dakar, and moved to Switzerland aged 20 to pursue his football career.

Following the 2002 World Cup, he moved from Swiss club Grasshoppers to French side Lens that summer, and two years later joined Fulham in the Premier League in a £6m transfer.

💙 #Pompey are mourning the sad loss of Papa Bouba Diop, who has passed away at the age of just 42 https://t.co/SOudqQhhev

We are devastated to hear news reports this evening that Papa Bouba Diop has passed away, aged 42.

Diop was a towering presence in midfield for clubs and country, and earned 63 caps for Senegal, scoring 11 goals including that historic strike against France in Seoul.

The former Manchester United midfielder Paul Scholes once described Diop as one of most difficult opponents.

“We used to play against Portsmouth,” Scholes said on BBC radio. “Do you remember Papa Bouba Diop? Big, massive. They used to call him The Wardrobe! You get involved physically with him and you’re wasting your time.