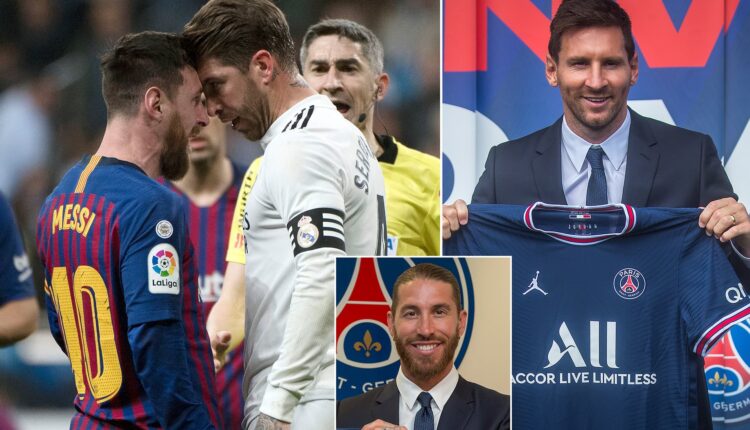 Sergio Ramos has told Lionel Messi and his family that they can move in with him if they get tired of staying in a hotel.

Bitter rivals for so many years in LaLiga the former captains of Real Madrid and Barcelona are now team-mates and according to El Pais Ramos has already told Messi if he doesn’t want to stay in a hotel he is welcome to bring his family to Ramos’ house.

Messi is currently staying in the hotel Le Royal Monceau where all PSG‘s big signings stay while they find permanent accommodation.

The hotel on Avenue Hoch is just off the Champs Elysees and Ramos was there briefly when he signed but is understood to have moved to the same Neuilly-sur-Seine area where Angel Di Maria and Marquinhos live.

Ramos had his run-ins with Messi during the Argentine’s 16 seasons at Barcelona and the house sharing offer is the first episode in a new chapter of their relationship.

It could still be some time before they appear on the pitch together.

Ramos is out for two months with a thigh injury and Messi has not trained since the Copa America and is not expected to be available to Mauricio Pochettino (who was playing in defence for Espanyol when Messi made his Barcelona debut) before the end of the month.

It was from the seventh floor of the hotel Royal Monceau that Messi waved to supporters from when he arrived on Monday.

Director of football Leonardo had already persuaded Messi to stick his head out the window at the airport to waiting fans.

PSG are desperate for him to fully engage with supporters as the €158 (£134) No 30 shirts start flying off the shelves of the club shops.

Back in Barcelona the club were still struggling to register new players so they can play for the club in Sunday’s first game against Real Sociedad.

Full-back Emerson has been registered but Barça’s struggles to get their wage bill down inside LaLiga’s financial fair-play demands have left serious doubts over whether they will be able to register Memphis Depay.

Barcelona also need to settle accounts with Messi. There is uncertainty over whether the club will have to pay him a loyalty bonus.

A bonus of €77m (£65m) appears in his 2017 contract. There have been suggestions that around €33m (£28m) of that is still owed and Barcelona are uncertain of what exactly is owed and what will have to be paid.

The feeling in Barcelona is that Messi will not demand the money from his financially-stricken former club.

The player could also still be owed salary that was deferred during the pandemic under the previous president to help the club through the crisis.