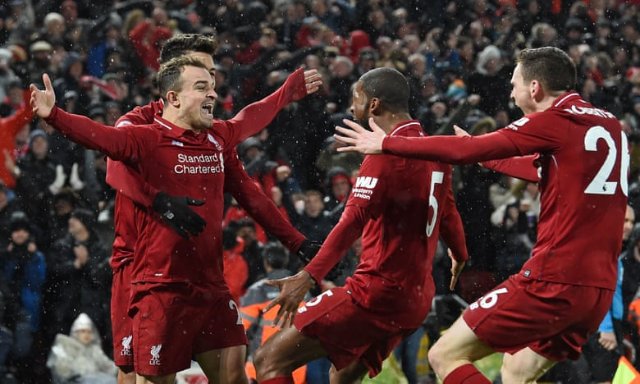 Xherdan Shaqiri came off the bench to inspire a Liverpool victory over a lacklustre Manchester United that takes them back to the top of the Premier League.

Liverpool needed the win after Manchester City beat Everton on Saturday – and it was substitute Shaqiri’s rapid-fire double strike in the second half that gave Jurgen Klopp’s side the three points they fully deserved.

Sadio Mane’s 24th-minute volley from Fabinho’s perfect delivery gave Liverpool the lead their lightning start merited, only for a dreadful error by goalkeeper Alisson to give United an unlikely lifeline before the break when he fumbled Romelu Lukaku’s cross into the path of Jesse Lingard.

United barely offered an attacking threat but were frustrating Liverpool until Klopp introduced Shaqiri with less than 20 minutes remaining, with devastating effect.

Meanwhile, Paul Pogba remained an unused substitute on United’s bench, Jose Mourinho opting instead to bring on Marouane Fellaini at the interval with his side short of inspiration.

There was an element of good fortune about both of the Swiss international’s goals, one deflected in from close range and the other off Eric Bailly to beat keeper David de Gea – but one cannot begrudge Liverpool their victory against this desperately ordinary United side.