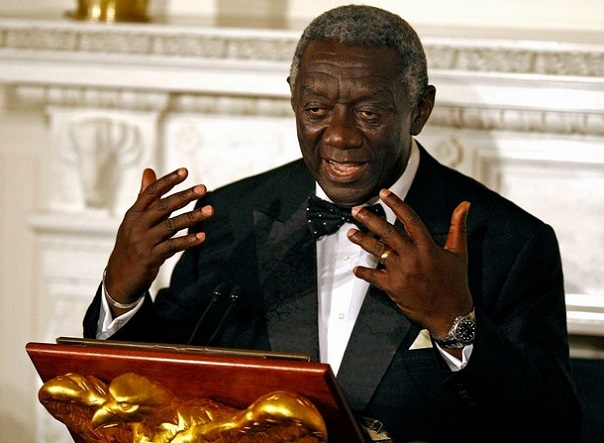 Former President John Agyekum Kufour says   the devastating impact of illegal mining popularly known as ‘galamsey’ in various parts of the country in recent times could be tackled by government  if indigenous  people  in their respective communities  were made to   have a fair share of  mineral royalties.

Speaking in an interview with Rt. Hon. Prof. Aaron Mike Oquaye as part of  a series of dialogue in reviewing  Ghana’s 1992  Constitution  by  the Institute of Economic Affairs (IEA),  recently, he said  that  illegal mining  continued to thrive due to inadequate policies aimed at making individuals  directly benefit from  mining.

He said “Geology has proven that every bit of our land is gold that is why galamsey is everywhere now but, what is our policy in tackling this galamsey thing. Supposing in my village there is a stream which is found to be gold plaited, a youngster who is well-educated and unemployed would never get a licence to go into small-scale mining. I tell you they don’t stand a chance but a big shot will show up and have a concession in the village and influence the chiefs, use the boys as they dirty themselves and the streams.”

The former President said that in order to avert the trend especially, where foreigners particularly the Chinese were given  the opportunity to mine while indigenous people  were molested and  criminalised,   communities should  be given a fair share of the mineral resources.

“What are we doing us a country to think of a policy that will make all Ghanaians everywhere feel they are stakeholders? As a it is now, they don’t get a share, if we do it well the business people will get their fair  share, the local people will get their fair  share   as well as the state  the state  will get it share strangely, we send soldiers, guards they go and molest  the locals.  Everywhere we find Chinese and we haven’t had report from them on how they got the gold,” the former President added.

In his reflections on  both intraparty and interparty  politics in the current democratic era,  which he said was characterised by  ‘monocracy’, he said  the phenomenon  was  not  new in the body politic of the nation  given the need for  individuals to benefit directly from  politicians during campaign.

He mentioned that there has, however, been over indulgence in the use of money in politics citing factors such as population explosion, rural urban drift and a major factor to be able to capture political power.

He stated “If you want to go to Parliament, you need tonnes of money to influence people because everybody thinks you are going in there to further your  lots, so if that’s the case, why don’t I get my share before you get there. When you get there  and I want to come and see you, do I get access? So,  they will hold you tight and since ambition is driving you, you will also go  all  the length  to get  money.  When you pay so much to get into parliament you also need to find ways and means to recoup.”

Govt to save US$3bn from gold for oil policy