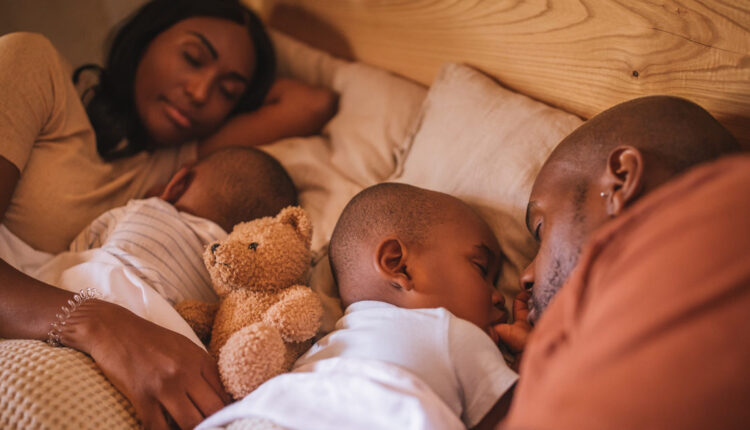 What we know about the risks and benefits of bed-sharing.

Should you share your bed with your baby? This is one of the most controversial issues related to infant sleep. Some experts are completely against bed-sharing, while others suggest it can be beneficial for both infant and parents.

However, one approach does not suit all families. Thus, parents should decide on this issue after considering the risks and benefits, and the needs of their own family.

Why some experts advise against bed-sharing

The main reason experts discourage bed-sharing is the increased risk of Sudden Infant Death Syndrome (SIDS) (Blair et al., 2014; Carpenter et al., 2013). The American Academy of Pediatrics advises against bed-sharing and recommends that infants instead sleep in their own crib in the same room with their parents for at least the first 6 months, but preferably the first year (Moon et al., 2016).

It is important to mention that some experts argue that bed-sharing is risky for SIDS only in the presence of certain other hazardous conditions, such as when parents consume alcohol, take drugs, smoke, sleep on a soft surface such as a sofa or soft mattress, or they are overtired.

However, there is evidence that the risk of SIDS is still higher for babies who bed-share than babies who do not, even in the absence of these conditions. For example, a meta-analysis of five case-control studies in the UK revealed that babies (younger than 3 months of age) who bed-share are still at higher risk for SIDS even when their mothers did not smoke and did not consume alcohol (Carpenter et al., 2013).

The implication of this study is clear: It is risky for babies to sleep with their parents in the same bed before 3 months of age.

Many parents still end up bed-sharing (Bilgin & Wolke, 2021; Mileva-Seitz et al., 2016). In some cases, this happens unintentionally. Parents might accidentally fall asleep while feeding their baby, for example. In addition, some parents might end up bed-sharing as a result of an infant’s sleeping difficulties, such as taking a long time to settle to sleep or waking up frequently during the night.

However, other parents may decide to bed-share intentionally, often for practical reasons or cultural norms. Breastfeeding is another major reason why parents choose bed-sharing, and there is consistent evidence that bed-sharing facilitates breastfeeding.

Mothers who bed-share spend more time breastfeeding at night, and are more likely to continue breastfeeding for a longer time, compared to those who do not bed-share (Gettler & McKenna 2011).

Only two studies have been conducted so far to investigate the link between bed-sharing and infant-mother attachment. The first was conducted in the Netherlands with 550 participants, and it revealed that solitary sleeping at 2 months of age increased the risk of insecure-resistant attachment at 14 months of age, in comparison to babies who’d had any bed-sharing (Mileva-Seitz et al., 2016).

This finding might be worrying for parents who don’t bed-share, but it is important to consider the limitations of the study. For example, bed-sharing was assessed at one time point only (i.e., 2 months) and the role of infant sleeping difficulties (i.e., frequent night waking, long settling durations) was not taken into account in the analyses, which is an important predictor of both bed-sharing and insecure attachment.

Also, the authors conducted multiple comparisons but did not apply statistical corrections, resulting in a researcher concluding that an observed effect is real when in fact it is due to chance.

The second study conducted on this topic is our own recent UK-based study (Bilgin & Wolke, 2021). We had a smaller sample (N= 178) than the previous study, but we included repeated assessments across the first 18 months (at birth, 3, 6, and 18 months).

Our findings did not reveal any links between bed-sharing at any point during the first 6 months and infant-mother attachment at 18 months. Thus, our results did not confirm the findings of the previous study.

Overall, there is very little evidence on the link between bed-sharing and attachment, and the two existing studies show conflicting results. We can say that there is not yet clear evidence for a link between bed-sharing and secure infant-mother attachment. It is simply too early to make any recommendations on this issue given the limited number of studies conducted in this area.

Looking beyond infant-mother attachment, can bed-sharing improve mothers’ bonding with their baby? One study investigated this question and showed that bed-sharing was actually associated with impaired maternal bonding (Mitchell et al., 2015).

In particular, mothers who were bed-sharing reported that they were annoyed or irritated by their baby more often in comparison to those who did not bed-share. Thus, the findings of this study are contradictory to the common belief that bed-sharing will improve maternal bonding.

However, it is important to note that this study looked at bed-sharing and maternal bonding concurrently at one time point only and included a large age range of infants in the sample (i.e., from 6 weeks to 4 months). Also, this study did not consider the role of infant sleeping difficulties on bed-sharing.

To illustrate, babies who wake up a lot or take longer to settle to sleep are more likely to end up bed-sharing (Bilgin & Wolke, 2021). Thus, it is possible that mothers find their babies irritating due to reasons related to those sleeping difficulties rather than bed-sharing itself.

We looked at the same research question in our recent study on bed-sharing (Bilgin & Wolke, 2021), considering the role of the sleeping difficulties of the infant. Our findings showed no significant links between bed-sharing at any time in the first 6 months (i.e., birth, 3 and 6 months) and maternal bonding at later assessment points (i.e., 3, and 18 months).

As we can see, there is limited research on this topic as well and the findings are not consistent. Thus, there is not yet convincing evidence to say if there are any benefits of bed-sharing on maternal bonding.

Bed-sharing has both risks and benefits. Bed-sharing before 3 months of age increases the risk of SIDS. On the other hand, it facilitates breastfeeding.

However, there is not yet any clear evidence for other claimed benefits of bed-sharing such as improvement of secure infant-mother attachment and maternal bonding.

When it comes to secure infant-mother attachment and maternal bonding, what matters most is the overall loving relationship.

This research evidence should be taken into consideration while deciding on bed-sharing. If parents decide that bed-sharing is the best option for them despite the risks, they must take precautions.

In particular, they should avoid sleeping on a sofa or armchair. Moreover, they should not bed-share when they smoke or have taken alcohol or drugs.