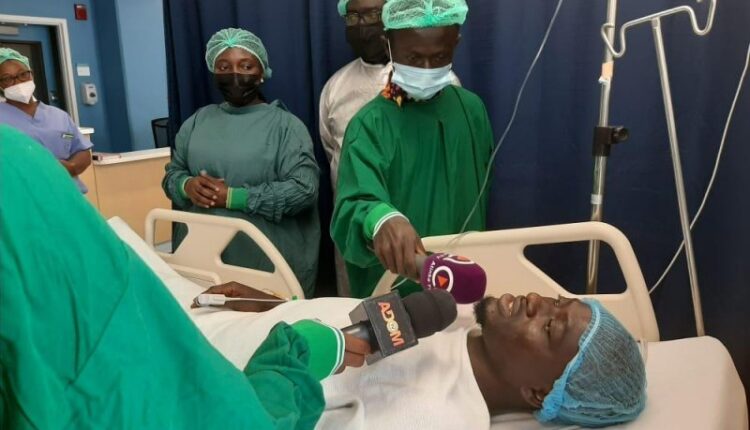 SIC Insurance Limited, insurers of members of the Ghana Journalists Association, has pledged to pay for the surgery of Pius Asiedu, a journalist, who was shot at a collation centre on December 7.

Management of the company and executives of the GJA made the pledged when they visited the victim who has undergone a successful surgery at the Greater Accra Regional Hospital on Friday.

Pius Asiedu was shot in the left leg by a man believed to be an NPP sympathiser, while observing the electoral process at the Ablekuma Central collation centre.

Before to 2020 the election, the GJA signed a Memorandum of Understanding with SIC, to provide an insurance package for journalists covering the election.

The GH¢20 million insurance package was to support 500 accredited members of the Association on covering the election with a high risk of bodily injury, and damage or destruction of equipment like cameras and phones.

The victim in an interview with the Ghana News Agency explained his misfortunes: “There was a heated argument between the representatives of the two political parties and in the process, we heard two gunshots, then, we decided to run for lives. When existing. There was a third gunshot and suddenly, I felt a sharp pain in my leg and fell on packed ballot boxes.

“People who were also running for their lives during the stampede were trampling upon me while I was on the ground. However, I managed to rise on a foot to shout for help that I was shot until some people came to my aid,” he said.

Mr Stephen K. Oduro, the Managing Director, SIC Life Insurance, said the company cherished journalists as they played a fundamental role in nation building, and gave an assurance that SIC, would forever stand by them.

“It saddens us that this had to happen to anyone, including journalists. Why do people even carry guns along to electoral grounds. The perpetrators must be made to face the full rigours of the law. But for SIC, our promises are sacred and we will deliver,” he added.

Nana Yaw Mantey, the Head of Corporate Affairs, SIC, commended the GJA and entire media fraternity for the unprecedented dedication they gave to the election coverage.

He said although the SIC did not expect such an unfortunate incidence to happen to a journalist, it only prepared to back them whenever the need aroused in their line of duty.

“Every pesewa or cedi needed for him to get back onto his feet to go to work, the SIC will take care of it and afterwards support him in other matters as well,” he said.

Dr Emmanuel Srofenyoh, the Medical Superintendent of the Greater Accra Regional Hospital, who said the surgery was a success, gave the family, GJA and SIC an assurance that the victim would be well taken care of.

As the attack happened in line of duty, Dr. Srofenyoh said the hospital was going to make some considerations when preparing the medical bills for the patient, to enable the family to live comfortably after his recovery.

Mr Affail Monney, the President of the GJA, thanked SIC and the Hospital, for the urgency attached to the disaster of Mr Asiedu, saying, SIC proved it was not only ‘big in name but also in delivery’.

“We were all shaky when the news erupted that a journalist had been shot in his line of duty. We intervened as expected of us to save his life,” he added.

Mr Monney said the magnitude of injury of the victim showed the degree of dangers journalists went through and appealed to politicians to desist from subjecting journalists to verbal and physical attacks.

While encouraging journalists not to be intimidated by the resistance from politicians among others while working, he also cautioned them against using their platforms to fun flames of violence and tension in this election period, adding “we are not in normal times”.

Madam Elizabeth Akrong, the mother of Mr Asiedu, extended her family’s deepest gratitude to the GJA, SIC, and the Hospital for their intervention to save his son’s life.