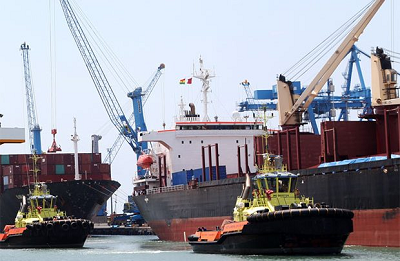 Six freight forwarder companies have lost their licences after they are alleged to have engaged in some malpractices that cost the state some $384,754.83 in revenue in August this year.

The Customs Division of the Ghana Revenue Authority (GRA) revoked the licences of the firms after it had established that they “falsified the port of loading document from India to other countries and under-declared the values”.

The falsified values were then presented to Customs for duty and tax purposes, resulting in loss of revenue.

This was revealed in an internal memo that required the revocation of licences and which was made available to the Daily Graphic.

The memo explained that the alleged illegalities of the companies benefited themselves and their clients, who are companies and individual importers.

Beyond the revocation of the licences, the Chief Revenue Officer in charge of Communications at the GRA, Mr Johnson Yankey, said the Customs Division would go after the importers identified in the deal in order to retrieve the money lost.

“I can assure you that in this situation, nothing would be lost because we will go after the importers for them to refund the revenue lost and they will do so with a penalty slapped on them to serve as a deterrent,” he said.

Mr Yankey told the Daily Graphic on October 27 that the affected companies would receive their revocation letters on today Monday, October 29, 2018.

Afterward, he said, they would be barred from engaging in the freight forwarding business in the future.

An analysis of the data showed that Abacus Digital Media Limited contained the highest values under-declared.

It showed that the forwarder cleared pharmaceutical products imported from India on three occasions in August, yet declared that the goods were imported from Italy and paid $48,377.6 to the state, instead of $227,253.9.

Also on three separate occasions, Fantega Company Limited cleared safety matches for two different importers – Kwesi Poku and Kwame Okyere – and declared that the goods, on one occasion, were from India and the rest were from China.

The GRA memo, however, indicated that the ICEGATE platform showed that the port of load for the goods was India. The firm consequently paid $26,000 as duties on the matches instead of $94,013.6.

It added that Nasowah Enterprise allegedly falsified the port of loading from India to China in the clearing of sardine and under-declared the values presented to Ghana Customs for duties. It paid $25,075 instead of $89,134.67.

The same situation happened with the rest of the freight forwarding companies — Dovis Clearing House Limited, Too Smatt Enterprise and Wayglow Enterprise — resulting in underpayment of $48,470, instead of $122,275.26.

Going forward, Mr Yankey said, Customs would leave no stone unturned in its quest to identify and bring tax and duty defaulters to book.

He added that the revocation of the licences of those freight forwarding companies was also part of the initiative to name and shame culprits.