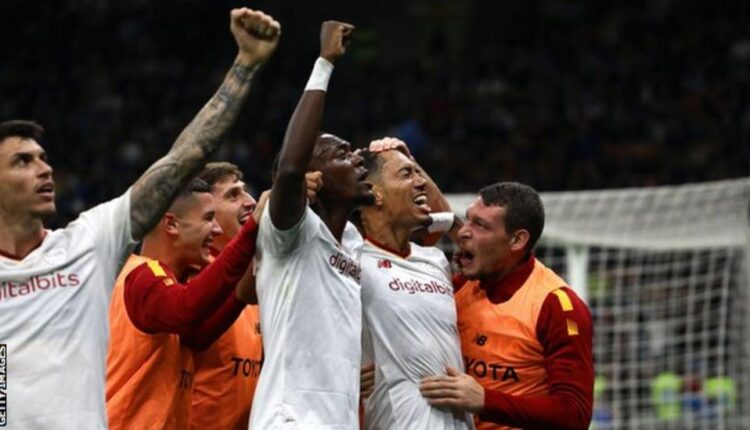 Chris Smalling headed a 78th-minute winner as Roma came from behind to beat Inter Milan at the San Siro and jump to fourth in the Serie A table.

Smalling rose highest to nod in Lorenzo Pellegrini’s free-kick and ensure Roma beat their rivals for the first time since February 2017.

Federico Dimarco had opened the scoring for Inter after 30 minutes.

But the visitors were level nine minutes later through Paulo Dybala’s volley from an acute angle.

Roma’s win saw them go to within four points of leaders Napoli, while Inter remain in seventh, eight points off the top having lost four of their eight Serie A matches so far this season.

Inter had had the better of the game’s chances overall. Hakan Çalhanoglu hit the bar from a free-kick in the 62nd minute, while former Roma striker Eden Dzeko had thought he had opened the scoring in the 11th minute only for his strike to be ruled out by VAR.

Elsewhere, AC Milan rose to third in the table with three goals coming in the final five minutes of their 3-1 win at Empoli.

The champions were leading 1-0 going into injury time after Ante Rebic broke the deadlock in the 79th minute.

Nedim Bajrami netted an equaliser for Empoli in the 92nd minute only for Fode Ballo-Toure to restore Milan’s lead two minutes later.

And Rafeal Leao added a third right before the full-time whistle as Milan eased to their fifth league win of the season.

Milan sit level on points with second-placed Atalanta and three points behind league leaders Napoli, who extended their lead at the top of Serie A with a 3-1 win at home to Torino on Saturday.