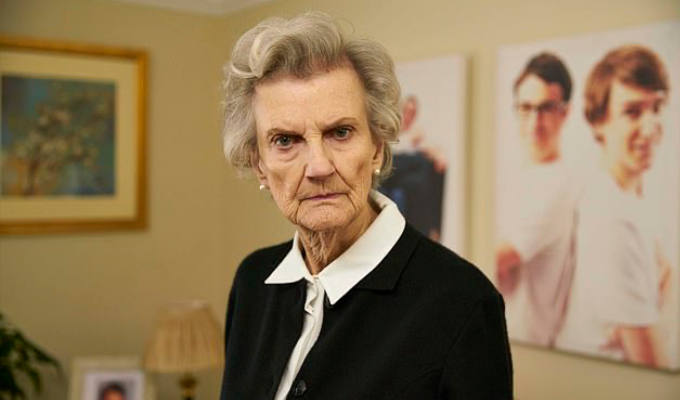 A dad is being called out by his son after his mother made racist comments about his son, who is in an interracial relationship with a Black girlfriend.

In his post, he detailed that his racist mother has been staying with him following surgery, and it has been causing problems with his son.

The dad’s son is angry because he has not pushed back on his elderly mother for making racist comments about her son’s Black girlfriend.

The man describes the grandmother as “a classic racist and…raging narcissist and she is not one to hold back from her opinions.”

When the Redditor said his son’s girlfriend was coming over for dinner, the grandmother said she “doesn’t want the girl near her because it’ll ‘disturb her.'”

So the man uninvited the girlfriend from the dinner because he “just [doesn’t] want any problems.”

This led his son to call him a “complacent racist” and accuse him of “protecting a racist” by allowing his mother to stay in the house and that he should have kicked her out over her comments.

But the dad feels torn because “my mother is an elderly woman who can hardly make it on her own as it is,” and while he doesn’t agree with her racist views, “I can’t just leave her to fend for herself.”

His wife agrees with their son, which angers him even more because, he says, “I know I’m not a damned racist.”

Most commenters agreed that the dad had not handled the situation correctly and that he needs to push back on his mother’s racism.

Many felt he had unfairly punished others for his mother’s actions by not calling her out.

As one put it, “you need to put the consequences of your mother’s racism back on your mother not onto your son and his girlfriend as you currently are.”

Another user heartily agreed, writing, “if you want to allow your mother to dictate who comes and goes, you are welcome to move into her house and you can care for her there.”

“Your wife and son do not deserve to be restricted and made to feel uncomfortable in their own home by your narcissistic racist mother.”

Others were a bit more empathetic for the positions abusive, narcissistic parents can put their children in. One commenter wrote, “He says he ‘literally does not know what to do.’ I’d believe him.”

But even the empathetic commenters agreed the dad had not handled this situation correctly, and that he needed to make a choice.

As one such person wrote, “Casting off/distancing from a family member you knew all your life can be extremely hard for some, especially if the people are his parents.”

“But sometimes [it’s] necessary if they are toxic to this degree. [The dad] has a choice to make now, whether to appease his mother…or to have a lasting, good-natured relationship with his son.”

After reading many of the comments, the dad came to agree. Adding onto his post later, he wrote, “Kicking my mother to curb for now is not an option…”

“…But she is the bad guy in the situation and she is the one who needs to change… I should not be accommodating her prejudiced ways and my son or his girlfriend should not have to suffer because of her.”

Family relationships are complicated, but sometimes the harder thing is the righter thing.