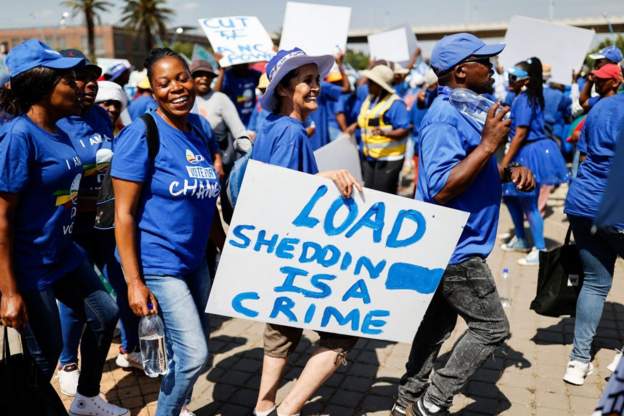 South Africa’s main opposition party, the Democratic Alliance (DA), is holding a march in Johannesburg to protest against worsening power cuts across the country.

The march is heading towards the headquarters of the governing party, the ANC.

The regular blackouts have been blamed on the government’s poor management of the power utility, Eskom, and an aging fleet of coal-fired stations.

“This is an ANC-created problem,” chanted a speaker from a makeshift podium set up in the Johannesburg city centre – where thousands of DA supporters have gathered.

Many are carrying placards written “enough is enough”.

The crowds will walk through the city’s streets to the ANC’s Luthuli House offices.

The DA says the ANC-led government is to blame for the persisting power crises.

South Africa has been experiencing regular blackouts since last year, leaving homes, hospitals and businesses in the dark for several hours each day.

There have been small pockets of unrest as a result, but this appears to be the largest demonstration in recent months.

The blackouts, known locally as “load shedding”, are carried out by energy utility Eskom – supposedly to keep the grid from collapsing.