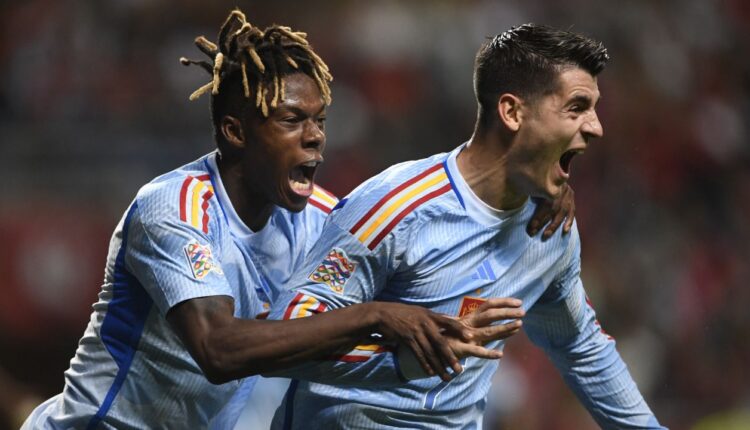 Spain secured a dramatic, late victory against Portugal to qualify for next year’s Nations League finals.

Portugal had looked more likely to take the lead throughout Tuesday’s match in Braga, but Álvaro Morata’s goal with two minutes remaining handed Spain an unlikely victory – the country’s first win in Portugal since 2003.

The 1-0 scoreline means La Roja narrowly topped Group A2 on 11 points – one ahead of Portugal and two ahead of Switzerland – and joins Croatia, Italy and the Netherlands in the finals.

Portugal, needing only a draw to the top the group, came close in the first half when Diogo Jota was denied by a strong save from Unai Simón.

The goalkeeper then denied Cristiano Ronaldo, who was put through on goal by Jota’s pass, from close range at the start of the second half before Rúben Dias saw his shot cleared over the bar by Dani Carvajal.

As the match entered its closing stages and a draw seemed the likeliest result, substitute Nico Williams headed across goal and into the path of Morata, who hooked a shot into the open net to spark jubilant celebrations among the Spanish players and coaching staff.

Portugal had one more chance to level and return to the top of the group, but Ronaldo once again had a shot blocked by the legs of Simón. 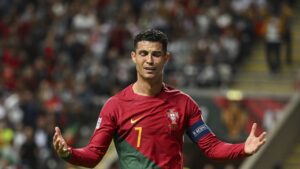 “If we were knocked out, it had to be by leaving everything on the field and that’s how it was one more time for us,” Atlético Madrid’s Morata told reporters after the game, according to Reuters.

“Every time that Spain have to show up in big games, we do it. That’s how we do it and tonight we did it again.”

A surprise 2-1 defeat at home against Switzerland on Saturday seemed to have put qualifying for the Nations League finals out of reach for Spain before Morata’s late goal.

The finals take place in June next year with the host country chosen in January.