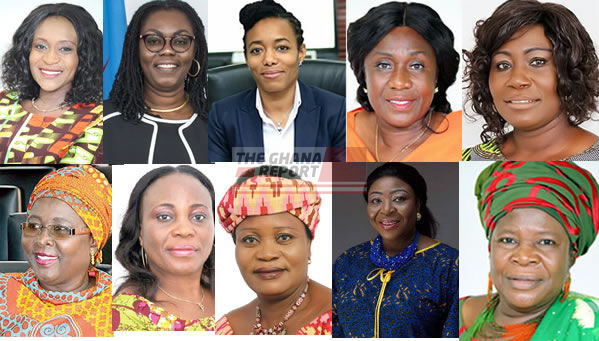 SPECIAL REPORT: Here are the top 10 most vocal female MPs in 2019

Theghanareport.com’s political desk has pored through 125 official reports of proceedings in Parliament in 2019 to bring you data on the performance of MPs on the floor of the house.

Your informative website does not claim this research is an exhaustive report on the contributions of MPs, as it does not include their performance at the committee level. It is nearly impossible to track the work of MPs during committee sittings.

The research does, however, track the number of questions, statements and contributions made on the floor where final decisions, approvals and debates are settled.

The research also excludes leadership of the house as by their position, they are often given more opportunities to contribute. The research, in some cases, also offers explanations on why an MP may have contributed more or less.

It relies exclusively on the 2019 Hansard, published on the Parliament of Ghana’s website as of February 2020.

Theghanareport.com is grateful to Parliament for making the Hansard available on its website and taking steps to regularly update it.

Ghana’s 7th parliament has 275 MPs, out of which only 38 are females. However, the Deputy Majority Leader, Adwoa Safo, is not part of this research because of her position, which allows her to contribute as and when necessary.

That notwithstanding, 10 female Members of Parliament were more vocal in catching the Speaker’s eye to either make a comment, statement or even ask questions.

Below is a list of the top 10 most vocal female MPs.

The first of these female MPs is Atiwa East MP, Abena Osei Asare. Mrs Osei Asare belongs to the Majority side of Parliament, which means she is a member of the governing New Patriotic Party (NPP).

She doubles as a Deputy Finance Minister. That position in government should explain why she would speak more in the House as she leads the Finance Ministry’s work in Parliament.

During the period under review, she spoke 58 times, often laying papers and seconding motions tabled by the Finance Committee.

She serves on the Environment, Science and Technology Committee as well as the Standing Orders Committee of Parliament.

She represents the people of the Ablekuma West Constituency on the ticket of the ruling New Patriotic Party (NPP).

Mrs Owusu-Ekuful, is a second-term MP, and is hoping to retain her seat in the legislature. During the period under review, Madam Ekuful, who doubles as the Communications Minister, spoke 33 times on the floor.

Most ministers often find it hard to divide their time between Parliament and the ministry.  The vociferous MP is a member of the 6th and 7th parliament.

She serves on the Health and Appointments committees.

Dr Zanetor Rawlings is one of the respected voices on health issues in Ghana’s Parliament.

She entered Parliament on the shoulders of her father’s name and lived up to expectations as she is one of the few women who consistently contributed to debates on the floor in 2019.

Although a first-term MP, she mastered the rules of the house and contributed 26 times in the year under review. She represents the people of Klottey Korley.

She sits on the Gender and Children Committee as well as the Environment, Science and Technology Committee.

Laadi Ayii Ayamba is the Member of Parliament for Pusiga in the Upper West Region. She is a second-term MP, having first entered the House in January 2013.

She represents her constituents on the ticket of the opposition National Democratic Congress (NDC).

Madam Ayamba spoke 25 times during the period under review, making her the 4th most vocal MP out of all 37 female MPs.

The former teacher is a member of the Education, Gender and Children as well as the Road and Transport committees.

She is a Minority MP on the ticket of the NDC. Madam Ackuako came joint-fifth on the chart of the most vocal female MPs with an overall score of 20.

She is a first-term MP and serves on two committees of the house; Works and Housing Committee as well as the Poverty Reduction Strategy Committee.

Interestingly, she contested the current MP for Dome-Kwabenya, and Deputy Majority Leader, Adwoa Safo, and lost before she switched constituencies.

Also a first-term MP, Elizabeth Afoley Quaye has a tie with her colleague on the other side of the chamber, Sophia Karen Edem Ackuaku.

She spoke 20 times during the period under review.

Madam Afoley Quaye is also the Minister for Fisheries and Aquaculture. She once courted the Speaker’s fury after she failed to show up in Parliament to answer a question.

Apart from her role as minister, she is also on the Standing Orders and Science, Technology and Environment committees of Parliament.

Hajia Alima Mahama, once considered as an NPP running mate material, placed 7th out of 37 on the list of theghanareport.com‘s chart. As vocal as Madam Alima Mahama is, she spoke 19 times in Parliament.

She doubles as the Minister for Local Government and Rural Development under the current regime.

Hajia Mahama also serves on the Standing Orders and the Defence and Interior committees.

She is not a very familiar name in the media space, but Angela Oforiwa Alorwu-Tay held her own among female MPs in the House.

She placed joint 8th on the list with 18 contributions on the floor. Madam Alorwu-Tay is a first-term MP.

She represents the people of Afadzato South constituency in the Volta Region on the ticket of the largest opposition party, NDC.

At the committee level, she is a member of the Special Budget Committee and the Employment, Social Welfare and State Enterprises Committee.

As a second-term MP, Helen Ntoso is tied with the Afadzato South MP. She representing the people of Krachi West on the ticket of the NDC. Her voice was heard 18 times in the law-making chamber.

Madam Ntoso was also a member of the 6th Parliament. She serves on two committees in Parliament, namely: the Gender and Children Committee as well as the Defence and Interior Committee.

Dr Bernice Heloo represents the people of the Hohoe Constituency in the Volta Region on the ticket of the opposition NDC.

She is a two-term MP and serves on three (3) committees of Parliament. These committees are the Appointment Committee;  Environment, Science and Technology; and Poverty Reduction Strategy committees.

Dr Heloo took the 10th position out of 37 female MPs with a total of 15 contributions on the floor of Parliament. 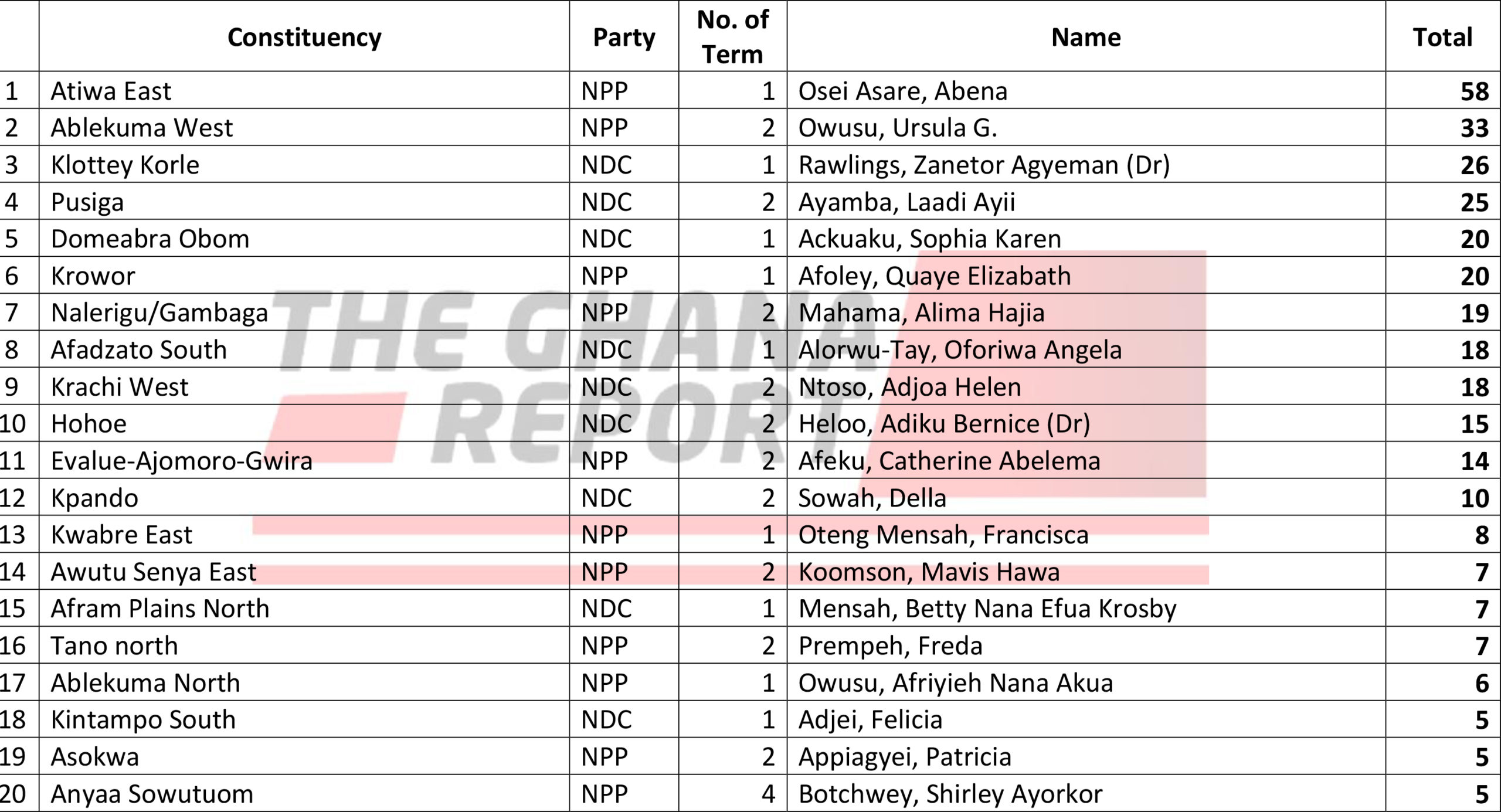