In that investigative piece, it was revealed that a Burkinabe contractor named Oumarou Kanazoe gave a Ford Expedition station wagon as a “gift” to President John Dramani Mahama in 2012.

The report also revealed that Mr. Kanazoe was involved in some questionable contracts with the government of Ghana, one of which was the Ghana Embassy fence wall in Burkina Faso which cost the government $650,000.

He had also been awarded part of the Eastern Corridor Road project between Nkwanta and Dodo Pepesu in the Oti Region. The road was commissioned in April 2016, by President John Mahama.

Four years after the scandal and the commissioning of the road, theghanareport.com has returned to the 46.4km Dodo Pepesu-Nkwanta road, which was constructed by the contractor. The road was highly praised by President John Mahama as, “one of the best quality roads in Ghana.”

A month after commissioning the road, potholes were spotted on it and have since developed serious defects at many sections of the road.

Manasseh’s investigation had revealed that Mr. Kanoazoe had won and had been earmarked for contracts in Ghana after he became friends with Mr. John Mahama.

Mr. Kanazoe, after seizing Manasseh’s recorder in his office in Ouagadougou, told him (Manasseh) how he became John Mahama’s friend. He said he had put in a bid for a contract in Ghana but did not win.

He gave the Ford vehicle to President Mahama in October 2012. 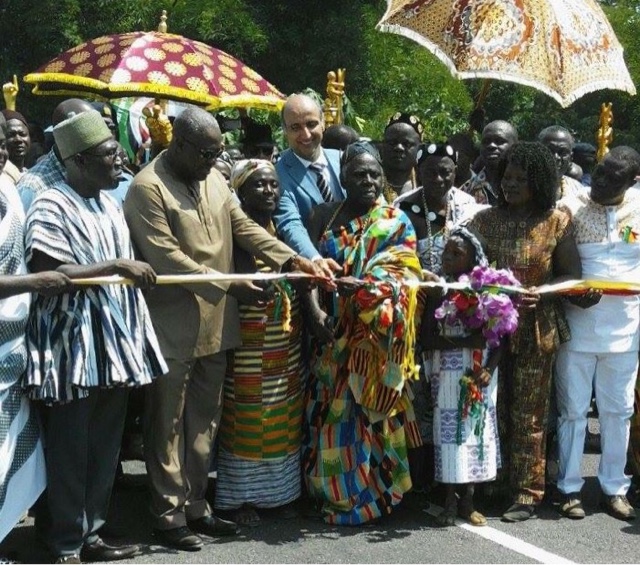 In 2012, Mr Kanazoe won the contract to construct the 46.4-kilometre Dodo Pepeso-Nkwanta road. That road was completed and inaugurated on April 19, 2016, by President Mahama, who praised the Burkinabe contractor very highly. 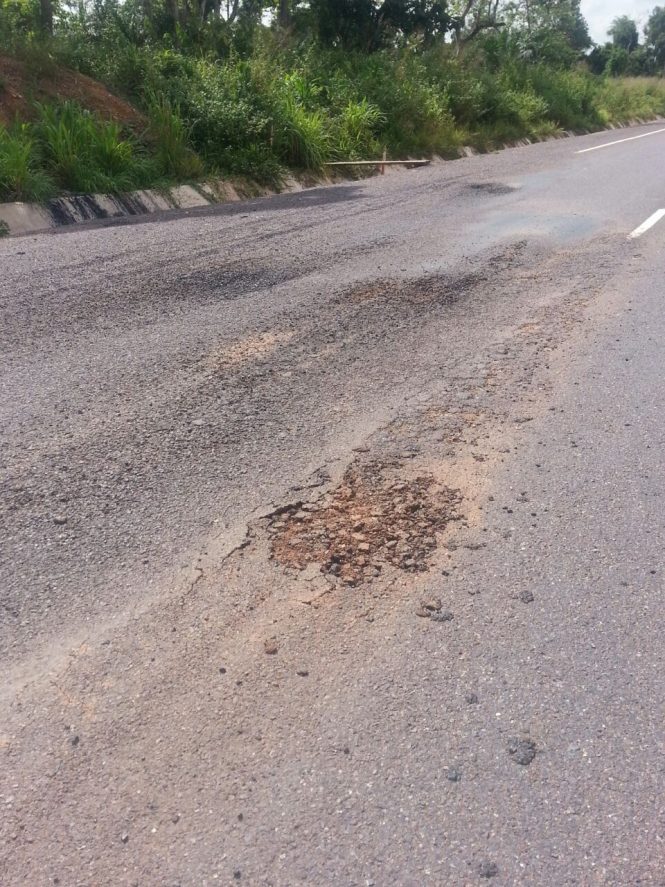 Photo: Kanazoe’s road a month after the commissioning

“I also want to take the opportunity to thank Messrs Oumarou Kanazoe Contractors Limited of Burkina Faso for the very high quality of work they have done on this stretch of road. As I have said, perhaps, this is one of the best quality roads in Ghana today and I will urge the Minister of Road and Highways to bring other contractors to come and see so that they can emulate it in other parts of the country,” President Mahama said.

It turned out the road was not as good as the president claimed because just a month after the commissioning, the defects started to show.

This road was commissioned four years after the N1 Highway in Accra. Unlike the N1, which is very busy with heavy duty trucks from the Tema Harbour, the Nkwanta-Dodo Pepesu road is not very busy because the Eastern Corridor Road is yet to be completed. The road is however deteriorating while the N1 is still intact.

The Ministry of Roads and Highways was in the process of awarding Oumarou Kanazoe Construction Limited a contract worth GH¢82million on single source procurement basis when the story broke.

Sector Minister, Inusah Fuseini, said the Burkinabe contractor was being handpicked for the 28-kilometre road project because of the quality of the road he had constructed between Nkwanta and Dodo Pepesu and the fact that he was near the project site.

He said moving from Burkina Faso to the Hamile area would be easy for the contractor whose machinery and equipment were in Burkina Faso.

Another reason Inusah Fuseini said Kanazoe was being considered for the project was the fact that he had constructed the Burkina Faso-Hamile stretch of the road and was familiar with the terrain.

Mr. Kanazoe pulled out of this deal after the Ford story was published.

Some groups and individuals petitioned the Commission on Human Rights and Administrative Justice (CHRAJ) to investigate President Mahama. CHRAJ concluded that the president had violated the gift policy by accepting the Ford vehicle from the contractor. CHRAJ, however,  said it did not amount to conflict of interest.

While investigating the scandal, Manasseh spoke with the Presidential Spokesperson on Governance and Corruption, Daniel Batidam, and asked him hypothetically what his advice to the President would be on whether or not to accept gifts of high value.

He smiled and replied, “Well, I’m sure you know that these are not situations that would occur in reality in terms of the kind of president we have.”

“I think it’s obvious. It’s obvious that any leader, any president: not even a president, a minister; a responsible public servant would know that that situation could put him in a situation of not only conflict of interest but potentially being corrupted,” he said.

He continued, “And so I think it goes without saying that you cannot take gifts from sources that have the potential of influencing your decision making. It’s not acceptable. I think a responsible leader, minister [or] senior public servant would not need to be advised on that.”

There are calls on the government to continue with the Eastern Corridor road project. But it is evident that the stretch that has already been worked on is already deteriorating.

Here are photos of the road when theghanareport.com visited the stretch in May 2020