SPECIAL REPORT: The 9 medical prisoners and their babies at the Korle-Bu Teaching Hospital

Inside the maternity ward of the Korle Bu Teaching Hospital in Accra are nine nursing mothers whose most pressing desire and thought at the break of dawn each morning is “how do I go home?”

They are ‘medical prisoners.

These women have been held there until they are able to pay for their bills or benevolent individuals  ‘bail’ them out.

These “medical prisoners” have “adopted” the maternity ward as their new home since held for their inability to pay up their  bills.

The government of Ghana in July 2008 introduced the free maternal health policy under the National Health Insurance Scheme (NHIS).

The policy allows all pregnant women to have free registration with the NHIS after which they would be entitled to free services throughout pregnancy, childbirth, and 3 months postpartum.

But the scheme does not cover certain illnesses and complications during and after pregnancy.

Seven of these women are under 30-years-old.

Halimat Samun,19, the youngest of the nine women, is been charged GHC13,1150 after having had low hemoglobin during labor.

24-year-old Paulina Ogochuku is being charged GHC1,500 for a Cesarean section.

Another victim,29-year-old, Vera Adjei is being held ‘hostage’ for GHC1,350.90 a charge for severe anemia and abruptio placenta. 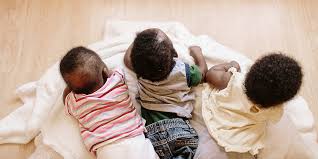 The oldest among them is 34-year-old, Veronica Mensah, who owes GHC1,574.53 for Cesarean section.

All these women have spent at least two weeks at the hospital since their discharge day.

They would be held hostages until the monies are paid or the hospital through the intervention of philanthropist relinquishes their debts.

Anyone who wishes to support these mothers should reach out to theghanareport foundation on 054 842 6252  or info@theghanareport.com