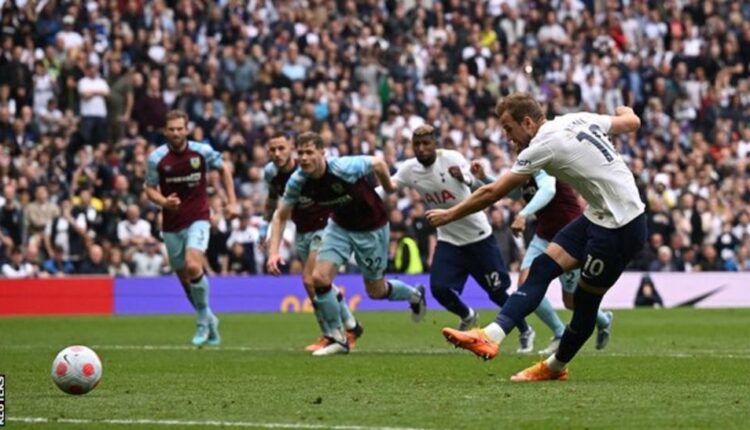 Spurs edge past Burnley to move into fourth place

Harry Kane’s penalty saw off a stubborn Burnley side as Tottenham moved above Arsenal into fourth place and kept the Clarets’ survival hopes in the balance.

On a tense afternoon in north London with so much at stake at both ends of the table, Kane’s spot-kick in first-half stoppage time proved enough to give his side three vital points in their bid for Champions League football.

Spurs move two points clear of the Gunners and will stay above them going into the final day of the season unless their north London rivals beat Newcastle at St James’ Park on Monday.

Burnley stay 17th and could fall into the relegation zone later on Sunday if Leeds beat Brighton.

The Clarets had to survive some intense early pressure but began to find their way into the game before it swung on Tottenham’s penalty, awarded on the stroke of half-time.

Davinson Sanchez’s attempt to flick on a ball in the Burnley box saw the ball brush against Ashley Barnes’ outstretched arm.

Referee Kevin Friend did not spot the incident and Harry Kane went close to turning in a Ryan Sessegnon pull-back as play continued, before VAR intervened.

After consulting his monitor, Friend pointed to the spot and Kane made no mistake, planting his penalty into the bottom corner.

That was not the end of Burnley’s threat, however. Clarets keeper Nick Pope made two brilliant saves from Son Heung-min after the break to keep the game in the balance, and his side almost levelled when Ashley Barnes fired against the post.

By the end, the home fans were imploring Friend to blow the final whistle as Burnley pumped balls into their box in the closing seconds, and they got their wish as Spurs held on for an important victory.

This Spurs performance brought none of the euphoria that had greeted their win over Arsenal on Thursday but they dug in to ensure it brought the same result.

They got it despite four of their players suffering from a stomach bug – goalkeeper Hugo Lloris, who played the 90 minutes, plus his deputy Pierluigi Gollini, winger Dejan Kulusevski and midfielder Harry Winks who were all on the bench.

Tottenham’s bid to finish fourth is still not in their own hands but they have put the pressure on the Gunners now, with only seven days of the season to go.

The way Antonio Conte’s side started the game, it appeared they would overwhelm the Clarets, who did not even manage a touch in the Spurs area until the 25th minute.

But Pope saved from Kane, who also saw a goal-bound header hooked clear by Nathan Collins and Burnley began to create chances of their own.

The visitors wasted a good opportunity to take the lead when Maxwel Cornet ran clear but fired weakly at Hugo Lloris, but they remained resolute at the back and Spurs’ frustration continued to grow – until VAR handed Kane the chance to make the breakthrough.

Burnley have work to do

The Burnley bench understandably reacted angrily when Tottenham were belatedly awarded the penalty that undid all of the Clarets’ good work in the first half.

Michael Jackson’s side had arrived with a game plan to defend in numbers and pack their own box and, after surviving that frantic start, it seemed to be working.

They did a decent job at chasing the game too and caused Spurs some problems in the second half – notably from set-pieces – but for all their industry, Barnes’ effort from distance was still the closest they came to an equaliser.

After taking 10 points from his first four games in charge, caretaker boss Jackson has now lost two games on the bounce.

His side still have a game in hand over Leeds, their closest relegation rivals, as well as a vastly superior goal difference – but they go into the final week of the season with their fate still uncertain.