The intermediary contacted by the Ministry of Health for the botched procurement of 300,000 doses of Sputnik V vaccine, Sheikh Ahmed Dalmook Al Maktoum, has agreed to refund an amount of $2,470,000 to Ghana.

This comes after Health Minister Kwaku Agyeman-Manu wrote to the businessman for a refund of the amount paid for the undelivered doses of vaccine.

Mr Agyeman-Manu in the letter said he wished to “formally request for the refund of the remaining amount for the non-supplied doses, which should be the total amount paid to your office minus the amount due for the 20,000 doses you already supplied, in line with your earlier e-mail dated 25th July 2021 in which it was affirmed that on the 13th of April 2021, funds were transferred into your accounts as 50% advance for the initial batch of 300,000 doses”.

In response to the sector minister’s letter, the Sheikh said he will refund the money and asked the ministry to confirm the difference for onward payment. 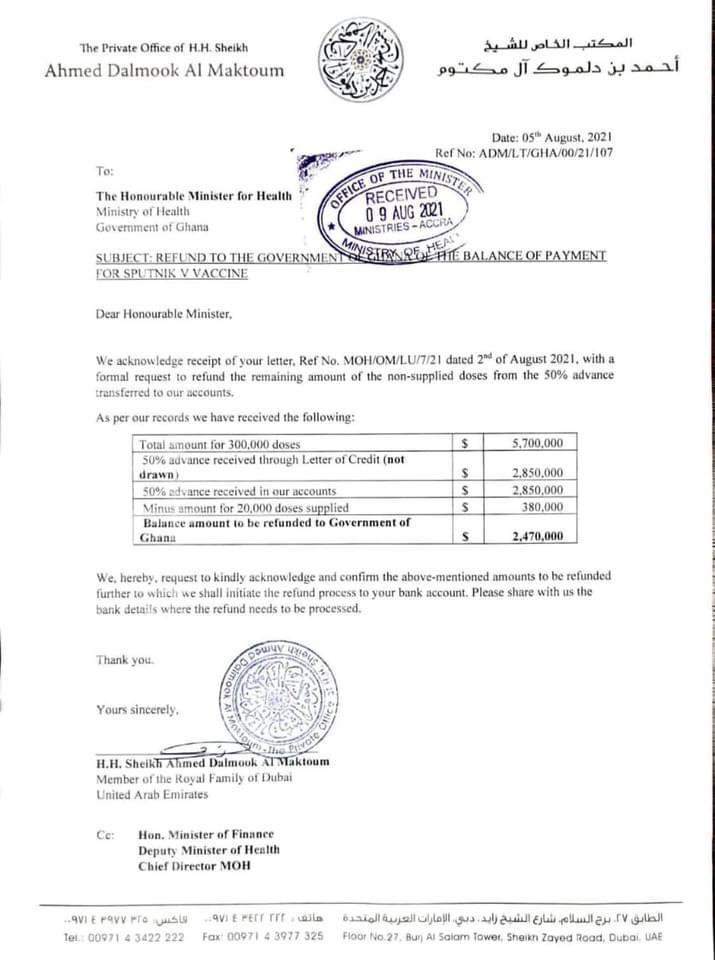 A nine-member ad-hoc parliamentary committee set up to probe the controversial Sputnik V vaccine procurement deal in their final report indicated that $2,850,000 representing 50% of the $5,700,000 owed to Sheikh Al Maktoum for the eventual supply of 300,000 doses of Sputnik V vaccine was actually paid to him.

The committee, therefore, tasked the Minister of Finance, Ken Ofori-Atta to retrieve the money that has been paid.

Aside taking steps to recover the money, it also recommended that in the future, any such transaction, be it local or international, should be subjected to broader stakeholder consultations and taken through due process of law, including parliamentary approval.

The controversy generated by the committee finding has prompted certain influential persons among the general public to express concern.

The Editor-in-Chief of the New Crusading Guide, Abdul-Malik Kweku Baako and private legal practitioner and sociopolitical commentator, Martin Kpebu, among others, have called for the resignation of the Minister of Health.

Mr Agyeman-Manu, admitted to committing “an error” in signing the contract agreement between the government and Sheikh Al Maktoum on March 9, 2021, by failing to seek both parliamentary and Cabinet approvals.

The decision to commit such an error, according to him, was because there was a desperate need to procure the vaccines for the country due to rising cases and deaths.

The desperation, he said, made him enter into such an intermediary agreement without following the laid down procurement procedures with the Sheikh, who is a member of the ruling family of the United Arab Emirates.

The minister made this admission when, for the second time on Monday, July 19, he appeared before the ad-hoc committee to answer questions on the contract.

He told the nine-member parliamentary committee that he did not seek legislative approval before he sanctioned the deal, but he had “plans to come and regularise, seek parliamentary approval after I have signed the contract.”

He also said no payments had been made to the intermediary.