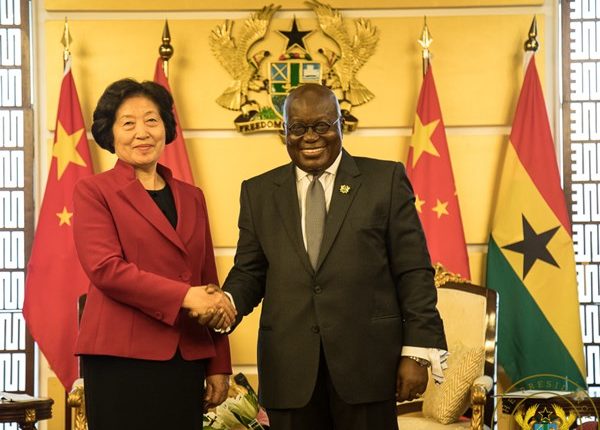 Stability, Development are the highlights of your Gov’t – Chinese Vice Premier to Prez Akufo-Addo

The Vice Premier of the People’s Republic of China, Sun Chunlan, has applauded the stability of the Ghanaian economy and development taking place under the Akufo-Addo led administration.

Paying a courtesy call on President Akufo-Addo, on Sunday, 10th November 2019, at Jubilee House, Sun Chunlan stated that “under your leadership, the Ghanaian government is pressing ahead with reforms, growth and improvement of people’s lives”.

She continued, “Stability and development has become the proud highlights of your government. As true and sincere friends, China feels very happy to see the achievements made, and wish the country even greater achievements in its national development.”

Extending the greetings of Chinese President, Xi Jinping, to President Akufo-Addo, the Chinese Vice Premier described Ghana’s President as “an old and good friend of China”, and expressed the gratitude for Ghana’s contribution to the growth and development of China.

Sun Chunlan told her Ghanaian counterpart that the purpose of her visit to Ghana is to implement the agreements reached between President Xi Jinping and President Akufo-Addo, at the 3rd Summit of the Forum on China-Africa Co-operation (FOCAC), held in Beijing, last year.

With Ghana and China celebrating 60 years of bilateral relations in 2020, the Chinese Premier was hopeful that the friendly relations between the two countries, which were forged by Chairman Mao Zedong and Kwame Nkrumah, will continue to stand the test of time, and stay strong for many more years.

On his part, President Akufo-Addo extended a warm welcome to Sun Chunlan, on behalf of the Government and people of Ghana.

Describing China as Ghana’s biggest trading partner, the President acknowledged the many developmental projects that are being undertaken in Ghana, with the help of Chinese companies and the Chinese Government.

The $2 billion Sinohydro deal, which will see the construction of a number of infrastructural projects in Ghana, according to President Akufo-Addo, is his Government’s major priority, adding that “it is extremely encouraging that the projects are now going to go forward.”

The first four projects under Phase 1 of the Sinohydro Master Project Support Agreement namely, Tamale Interchange, Prestea and Cape Coast Inner City Roads, the upgrade of selected feeder roads in the Ashanti and Western Region, and the Hohoe-Jasikan-Dodo Papesu roads have been approved by Sinosure, with the Vice President cutting the sod for these projects to begin in the week of 18th November, 2019.

President Akufo-Addo was hopeful that the remaining six projects, especially the construction of Accra Inner City Roads, currently under evaluation by Sinosure, would be approved expeditiously, hopefully by the end of the year, for work to commence in earnest.

The vision of “mutual co-operation, mutual development, and shared prosperity” expressed by President Xi Jinping, is one, President Akufo-Addo said, Ghana ascribes to.

“So, we are looking forward to prosecuting the relationship between our two countries, and it is within that context that we are very happy to have you here with us”, the President told the Chinese Vice Premier.

Story By Gloria KAFUI Ahiable / info@theghanareport.com
Nana Addo Dankwa Akufo-AddoPresident of the RepublicSun ChunlanVice Premier of the People’s Republic of China
Leave A Comment
Cancel Reply
You might also like
News