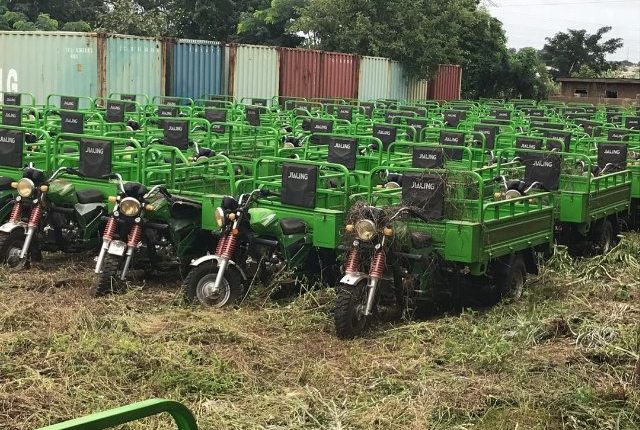 Northern Development Authority (NDA) has revealed that the state made a loss of about 96 percent, after investing some $9.5 million to procure tricycles for farmers to transport their produce.

According to a statement issued by the Authority, the beneficiaries paid back a paltry ¢1.25million after the Savannah Accelerated Development Authority (SADA) procured the tricycles at a project cost of $9.5 million.

SADA entered into a controversial Private Public Partnership (PPP) with UNIK Savannah Limited for the procurement of 5,000 tricycles.

Out of the 5,000 tricycles that were imported, 3,000 were assembled, 2,239 were released/sold and 732 left under very unfriendly weather conditions. Currently, there are a total of under 2,000 of the unassembled tricycles.

“This 96 percent loss, totalling over $8 million to an Economic Zone that the UNDP in their 2018 Human Welfare study acknowledge as the poorest in Ghana, is unfortunate and constitutes a serious financial loss to the state,” the statement mentioned.

NDA said it is taking steps to ensure that lost funds are retrieved. The authority also urged all persons owing them to pay or risk being a named and shamed.

The NDA also revealed that, a committee has been set up to determine the current status of the tricycles, to identify and determine quantities sold/distributed to beneficiaries and state of indebtedness of beneficiaries, and finally to suggest modalities for disposal of quantities still in stock.

This press conference has been occasioned by teething challenges we inherited from the defunct establishment, SADA which needs to be addressed in order to set the records straight and make very important decisions going forward. This press conference is intended to address some of the issues relating to the collapsed Public-Private Partnership (PPP) Agreement between SADA and UNIK Savannah which resulted in the stoppage of sale of tricycles now left in the mercy of the weather here in our yard.

It will interest you to note that SADA entered into a controversial Private Public Partnership (PPP) with UNIK Savannah Limited for the procurement of 5,000 tricycles under the tricycle project at a cost of $9,500,000 (at the prevailing exchange rate at the time in 2015). Out of the 5,000 tricycles that were imported, 3,000 were assembled, 2,239 were released/sold and 732 left under very unfriendly weather conditions. Currently, there are a total of under 2,000 of the unassembled tricycles.

Per the contractual agreement, UNIK Savannah Limited was to procure, assemble and retail tricycles and motorcycles. Secondly, UNIK Savannah was also to identify market officers or agents, and, through a hire purchase agreement, to sell out these tricycles via a credit system process.

Ladies and gentlemen of the media, UNIK Savannah Limited otherwise known as UNIK Dezines strangely collapsed within six (6) months of its creation.  At the point of Collapse Unik-Savannah had demonstrated a clear inability to recover payments of beneficiaries of tricycles through the marketing officers and agents. This was strange and appeared to have been orchestrated deliberately for personal “gain-and-collapse” game masterplan.

Marketing officers of UNIK Savannah Limited were fingered in fraudulent inclination after they reportedly received payments from some beneficiaries but failed to account for same. In the wake of this, monies that were expected to be paid into a special account at Stanbic Bank to amortize a letter of credit guaranteed by the authority were never paid.

Our discerning Press men and women, it is worthy of notice that the tricycle business was designed as a Private Public Partnership (PPP). However, SADA, is one-sided expenditure role, bore all the cost of this UNIK Savannah/SADA Venture. A whopping Nine million, Five Hundred Thousand (US$9,5000,000) was provided by SADA alone via a Letter of Credit arrangement (L/C) and none by its PPP Partner to procure the tricycles. This cost, the records show included import, salaries and allowances, transporting and carriage, field clearing and other services. It is clear that then SADA did not show leadership, professionalism and prudent resource management. It is this which plunged the UNIK Savannah into huge debts.

Firstly, it was clear that having planned the procurement of thousands of bulky goods, SADA failed to anticipate the storage facility needs for the consignment. Thus no proper facility was provided for the assembled tricycles leaving them under the mercy of the weather for years and resulting in a significant depreciation of up to 60% according to the latest valuation by the State Transport Company (STC) Limited.

It was realized that the organizational structure of UNIK Savannah was deficient paving way for fraud by some of the marketing staff. There are still more questions than answers. Where is the PPP Agreement between SADA and UNIK Savannah? What were the terms of agreement between SADA and UNIK Savannah? Who were these “Sales Officers?” How were they engaged and disengaged? Did their conditions of engagement allow for disincentive measures to ensure they did not cheat the system? Did any of them take responsibility for monies unpaid to the Coffers of SADA? Did SADA make any effort to take legal action against Agents who never paid for the consignments they took? To SADA’s credit, it is on record that SADA, itself dissatisfied by their own very poor performance at the time, reported the matter to the Economic and Organized Crime Officer (EOCO) for investigation.

Our friends from the media, with the change of government in 2017, there was a heightened inclination to theft of these machines resulting in some military intervention in extreme cases to safeguard the property of the “Authority”.

SADA and the DEBT Portfolio

Out of the total of GH¢33, 649, 200 expected from the sale of the tricycles, only a woeful GH¢1,258,271 payments have been made by beneficiaries (i.e. under 4%) leaving an outstanding balance of GH¢32,390,929. This 96% loss totalling over Eight Million USA Dollars to an Economic Zone that the UNDP in their 2018 Human Welfare study acknowledge as the poorest in Ghana is unfortunate and constitutes a serious financial loss to the state. Therefore as per Board instructions Management will pursue diligently all beneficiaries for recoveries of monies owed to the state.

We are by this urging those who are still indebted to the authority to make efforts in settling their indebtedness before they are named and shamed.

It is disheartening that a project that is to help ameliorate the plight of poor persons within the NDA operational zone could be mismanaged to this magnitude and it gives us room to ask if the then SADA Management of the era would have employed the same management skills if it were their personal resources?

When the new Management and Board came into office, one of the first priorities tackled was the issue of the tricycles. The NDA Board constituted an adhoc Board Committee to find out what really went wrong and to recommend what action should be taken.

Recommendations by the NDA Board Committee

– The reviewed prices proposed by STC be accepted, having taken cognizance of depreciation be implemented;

– A vigorous retrieval plan of funds should be embarked upon.

– Management explores all issues relating to EOCO investigations on Marketing Officers because the findings of Economic and Organized Crime Office (EOCO) are relevant to determine the way forward in retrieving monies from former Marketing Officers;

– Management investigate all banking processes to assess and reconcile bank statements of pay-in and retention by Marketing Officers, beneficiaries and UNIK Savannah; and

– An open direct sale of tricycles to the public based on the revalued prices by STC throughout the NDA operational zone. This they hope will afford all interested individuals (farmers, traders and Small and Medium Scale Entrepreneurs) to have access and opportunity to purchase.

We are happy to announce that the many hurdles have been called and Management is set to begin sales within the next couple of weeks.

We wish to take this opportunity to thank the Board of NDA for its visionary leadership, guidance and support aimed at shepherding the Authority to a better and a vibrant state institution.

We also wish to thank the support staff and to you the media for coming. It is our fervent hope that this relationship will continue in the interest of mother Ghana.