Nine persons are standing trial for roles they allegedly played, leading to the loss of GH¢5.7bn in the uniBank crash in August 2018.

They have been slapped with 68 charges ranging from fraudulent transactions to money laundering. uniBank, a private indigenous bank, began banking operations in 2001, but went bust after 17 years.

It was founded by a former Governor of the Bank of Ghana, Dr Kwabena Duffuor, who would later become Ghana’s Finance Minister between 2009 to 2012.

But the bank increasing needed bail-outs from the Bank of Ghana totaling some GH¢2 billion between 2015 until its demise.

Theghanareport.com takes a look at the facts of the case as presented by the state and maps out the roles each of the nine played. 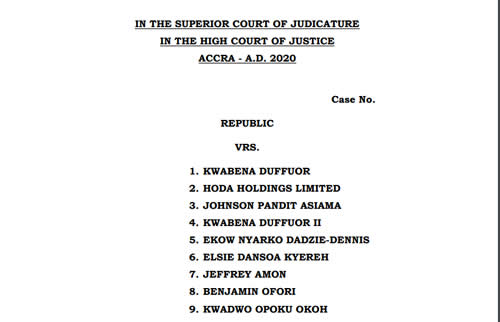 On top of this family-related business entity, HODA Holdings, is Dr. Kwabena Duffour.

5. Kwadwo Opoku Okoh (Financial Control Manager of uniBank and is
Head of Finance of HODA)