Stocks surged the most in more than a week after the reported death tolls in some of the world’s coronavirus hot spots showed signs of easing. The yen weakened and Treasuries fell.

“You can’t say that we’ve definitely turned the corner for certain but it does appear as though that is a good sign,” said Mark Heppenstall, chief investment officer at Penn Mutual Asset Management, which oversees $28 billion. 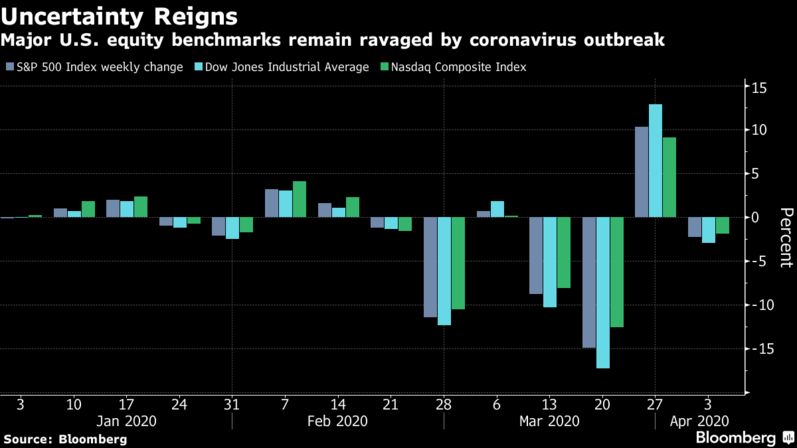 The upbeat tone in markets follows another negative week, and the mood among investors remains divided. Bulls are pointing to more attractive valuations, unprecedented stimulus and now slowing death rates in several major countries. Bears are fretting the continued spread of the disease, dismal economic data and the rising corporate costs of the pandemic and subsequent shutdown.

“For now the markets will likely remain hostage to news on how long it will take to ‘get back to business’ and ‘the good life.”’ John Stoltzfus, the chief investment strategist at Oppenheimer & Co., wrote to clients. “We’d expect markets to continue trading on a combination of fear, technical factors and wistful hope with fundamentals clouded by the uncertainty weaved by the insidious virus.”

In Asia, Japan’s benchmark ended almost 4% higher even as that country moved closer to declaring a state of emergency. The yen dropped as haven demand receded. Shares in Hong Kong rose while Shanghai was closed for a holiday.

Elsewhere, crude oil pared a decline of as much as 11% though it remained lower as uncertainty swirled over a proposed meeting of the world’s top producers. The pound fluctuated before turning higher even as U.K. Prime Minister Boris Johnson was admitted to hospital for tests after suffering from the coronavirus for 10 days.