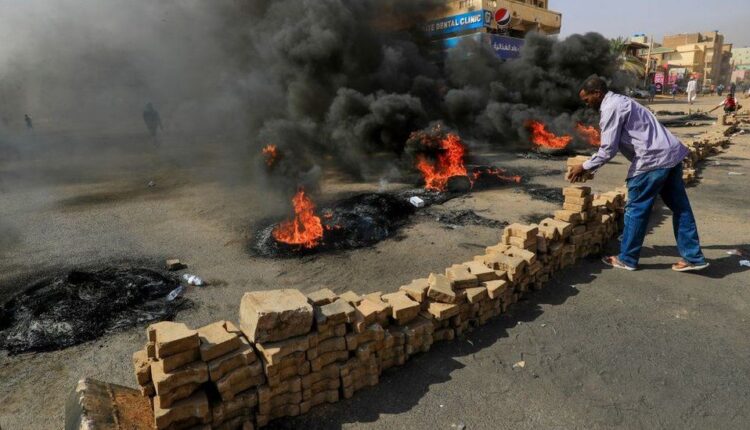 Members of Sudan’s transitional government and other civilian leaders have been arrested amid reports of a military coup.

Prime Minister Abdallah Hamdok is among those reported to have been put under house arrest by unidentified soldiers.

Pro-democracy protesters have taken to the streets of the capital, Khartoum.

Military and civilian leaders have been at odds since long-time ruler Omar al-Bashir was overthrown two years ago and the transitional government set up.

Video footage from the north African nation’s capital on Monday showed protesters manning lit barricades and entering the area near the military’s headquarters. There are some reports of gunfire but these have not been confirmed.

No-one in the military has commented so far and it remains unclear who was behind the pre-dawn arrests.

A statement from the information ministry on Facebook said the detentions were carried out by “joint military forces” and those arrested were being held in “an unidentified location”.

The ministry said soldiers had stormed the HQ of the state broadcaster, in Omdurman, and detained staff there.

It also said Mr Hamdok was being pressed to support a coup but was refusing to do so and he urged people to continue with peaceful protests to “defend the revolution”.

The UK’s special envoy for Sudan and South Sudan, Robert Fairweather, tweeted that military arrests of civilian leaders would be “a betrayal of the revolution, the transition and the Sudanese people”.

The US, UN, EU and Arab League have also expressed deep concern.

Witnesses say the internet is down and that army and paramilitary troops have been deployed across the city. Khartoum airport is now closed, and international flights are suspended.

Sudan’s main pro-democracy group has called on its supporters to resist any military coup.