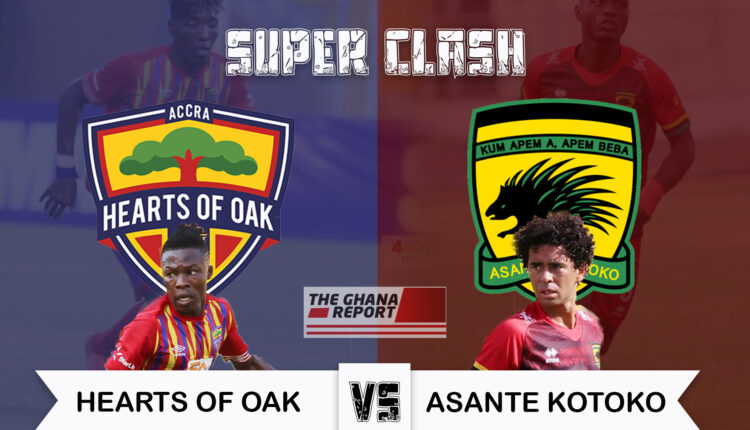 Super Clash: Reasons Why Asante Kotoko will destroy Hearts of Oak on Sunday

Kumasi Asante Kotoko are tipped the favourites to beat Hearts of Oak when the two teams face off at the Accra Sports Stadium on Sunday in the 31st matchday fixture in the Ghana Premier League.

The match dubbed the Super Clash according to sports pundits, is considered the decider for the league title and the ultimate bragging rights.

Asante Kotoko and Hearts of Oak were involved in a fascinating goalless draw game when they met in the first half of the league. It was a match that saw both teams missing a glorious opportunity to score from the penalty spot.

But here are reasons why the Asante Kotoko will definitely get the better of Hearts of Oak on Sunday.

Asante Kotoko holds the best record against their arch-rivals in Accra due to their dominance in the recent past and wins at the ground.

The Porcupine Warriors seem to enjoy playing in the capital since they play without any pressure and that could result in the high level of confidence they present playing before fans at the Accra Sports Stadium.

Also, they have been one of the best performing away teams in the league this season which could be one of their trump cards heading into this game.

The only away loss was a trip to the Nduom Sports stadium to face Elmina Sharks, where they lost by a lone goal.

Asante Kotoko will be coming into the game with high momentum due to the recent results they have chalked against the Phobians.

Kotoko are unbeaten against Hearts of Oak in as many as 5 meetings since 2018. The Porcupine Warriors seem to have the antidote to beat the Phobians anywhere after recording 4 wins and a draw going into this game.

The issue of a team’s form doesn’t play any role in Hearts of Oak and Kotoko fixtures. However, this may not necessarily be true in this case as the Porcupines in recent times have shown form does matter at some point.

Arguably, Asante Kotoko possess more quality than their counterparts and it could be vital in getting them all three points on Sunday.

They might not have a clinical finisher following the departure of Kwame Opoku, but do have the men who can deliver when called upon. Even defenders like Abdul Ismail Ganiyu have shown their worth in goal scoring after the defender scored three goals in the month of May.

In conclusion, both teams have an interesting lineup of youngsters who are hungry for success. Kotoko’s Fabio Gama, Mudasiru Salifu and Emmanuel Gyamfi will be battling it out in the midfield against the likes of Benjamin Afutu, Emmanuel Nettey and Salifu Ibrahim to see who controls the game.