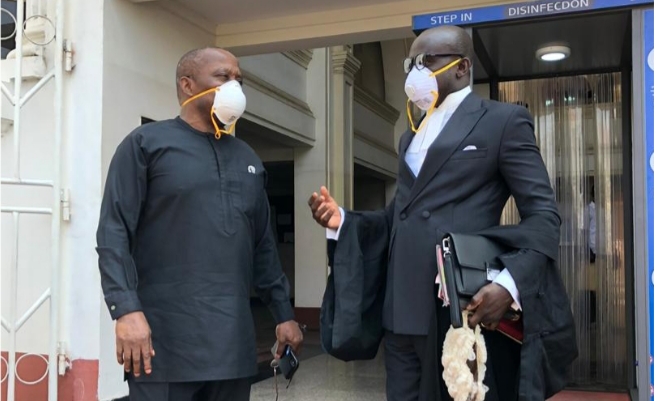 A seven-member panel of the Supreme Court has dismissed an injunction seeking to restrain Johnson Akuamoah Asiedu, from acting as the Auditor General.

This was after the court forced Eric Delanyo Aliyibor, counsel for the plaintiff, Prof Kwaku Asare, to withdraw the application before the court as it fell short of legal procedure.

The court’s decision followed a Deputy Attorney General, Godfred Yeboah Dame’s, request to strike out Auditor General Daniel Domelovo and his Deputy, Mr Asiedu as defendants, in a case in which a U.S-based Ghanaian law lecturer is challenging the legality of the government’s decision to ask Mr Domelevo to proceed on mandatory leave.

The court, presided over by Justice Jones Dotse, pointed out that the parties listed in the case were not in the proper order.

It was the argument of the court that the acting AG [Johnson Akuamoh Asiedu] and the substantive AG [Daniel Domelevo] could not be listed parties.

“What has the Auditor General got to do with this. You are challenging the constitutionality of the President’s action for the AG to go on leave. So why add the two [acting AG and substantive AG] as parties.

“Mr Domelevo is a public officer, if something has happened you should not add all of them. Leave Domelevo and his deputy out of it. There is absolutely no legal basis to add them,” the court argued.

It was the court’s view that the suit is challenging the constitutionality of the president’s action, and therefore, the only defendant must be the Attorney-General.

Having listened to the judges, lawyer for Prof. Asare withdrew his request for the two parties to be added.

With both names struck out, the apex court will now proceed to hear the case challenging the president’s action.

President Nana Akufo-Addo directed Mr Domelevo to proceed on his accumulated mandatory leave as required by the labour law beginning from July 1.

He was directed to go on leave after accumulating more than six months worth of rest.

Mr. Domelevo had been engaged in a war of words over a directive from the Presidency for him to proceed on a four-month leave.

The Auditor-General had responded to the letter insisting that his previous leave entitlement had been forfeited and that he was only entitled to the 2020 leave.

But the Presidency in a response to Mr. Domelevo said he should add the 2020 leave to the accumulated one, bringing the total to 167.

Opinion on the government’s decision to compel the state’s chief auditor to proceed on leave has been divided.

Some 500 Civil Society Organization (CSOs) registered their displeasure over the president’s order.

The group launched a social media campaign with hashtag #BringBackDomelevo to mount pressure on the government to rescind its decision.

But the government in response to their petition said it would not budge as the move was a legal one.

Prof Asare went to court to challenge the decision.