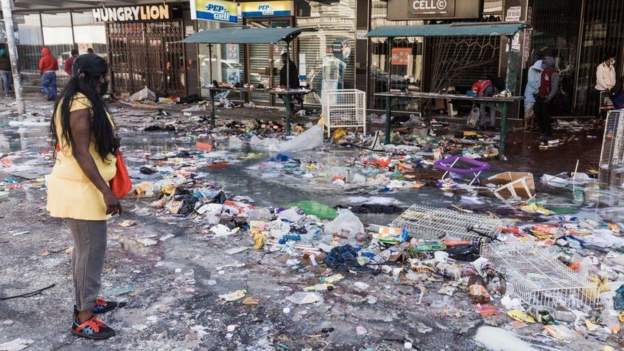 A South African court has granted bail to 22 people accused of instigating deadly riots in the country last year.

The charges relate to looting and public violence that took place in parts of KwaZulu-Natal in July 2021.

More than 300 people were killed in the unrest that erupted after South Africa’s former president, Jacob Zuma, was jailed for contempt of court.

Among the bail conditions was a warning not to post any information about the case on social media.

The suspects were arrested after investigators carried out an extensive trawl of their online posts.

While more than 5,000 people have been arrested in connection with last year’s violence, authorities have been under pressure because of low number of prosecutions.

Last month the government said that around 50 cases had resulted in guilty verdicts, with thousands resolved through non-prosecution.

South Africa is still trying to recover from the economic damage – estimated at close to $4bn.

At the time South Africa’s President Cyril Ramaphosa condemned the violence as an “attempted insurrection”.

The case has been remanded until 26 August.