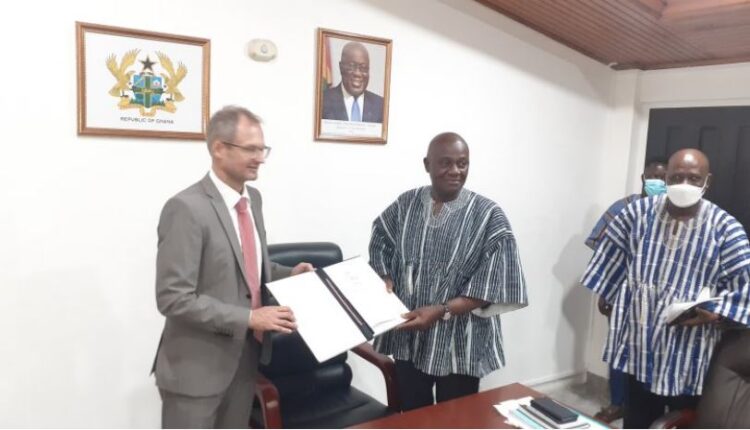 The Swiss Government has given Ghana a grant of Ghc 2.3 million to build the capacity of local government officials to provide quality services in a responsive manner.

The grant would be applied to a pilot project christened: “Capacity Building for Responsive, Effective and Efficient Local Governance in Ghana.”

Under the project, four key capacity building interventions would be implemented in 40 Metropolitan Municipal and District Assemblies to achieve the goal of responsive, effective and efficient local governance in the country.

Mr Philip Stalder, the Ambassador of Switzerland to Ghana, Togo and Benin announced this in Accra when he signed an agreement with Ghana for the commencement of the pilot project.

Mr Daniel Botwe, the Minister of Local Government, decentralization and Rural Development signed the agreement on behalf of Ghana.

Mr Stalder said Ghana had become a priority country for Switzerland’s economic development cooperation since 2002, and his country was implementing more than 30 projects in Ghana.

The Ambassador stated that it was aimed at promoting the private sector and an attractive framework for sustainable growth that would unlock decent income opportunities.

“Switzerland is a highly decentralized country and we believe in the advantages given by a decentralized system in terms of development and better accountability to the people.

“Our commitment to decentralization makes us proud for giving power directly to the people to decide on important things that affect their lives,” he said.

Mr Stalder was confident that the project would build consensus with all relevant stakeholders on the capacity-building framework to make it the main anchor for continuous professional development within the LGS.

“The project is ambitious because it seeks to promote dialogue between staff of District Assemblies and Regional Coordinating Councils, elected and appointment of members of the Assemblies and the political actors at the local level,” he said.

Mr Botwe, who is also the Member of Parliament for the Okere constituency in the Eastern region, commended the Swiss Government for the support, stating that the implementation of the project would enhance the technical and administrative capacities of local authorities.

Parliament in 2003 and Pursuant to Article 240(2) (b) of the 1992 Constitution promulgated laws for the establishment of the LGS and ILGS for the country’s Decentralization programmes.

Both institutions, the Minister said, worked together to ensure that the capacities of local government staff across the country were adequate for them to discharge their mandates.

The training, he said, when properly organised, would provide a structured and coherent way to systematically improve the performance of local governments and strengthen the links between staff training, performance assessments and career development.

Professor Nicholas Awortwi, Director of ILGS said the Institute was committed to ensuring that the objectives of the project were achieved.

Mr James Oppong Mensah, Chief Director, OHLGS pledged to ensure that the project
succeeds and scales up in other districts’ assemblies.