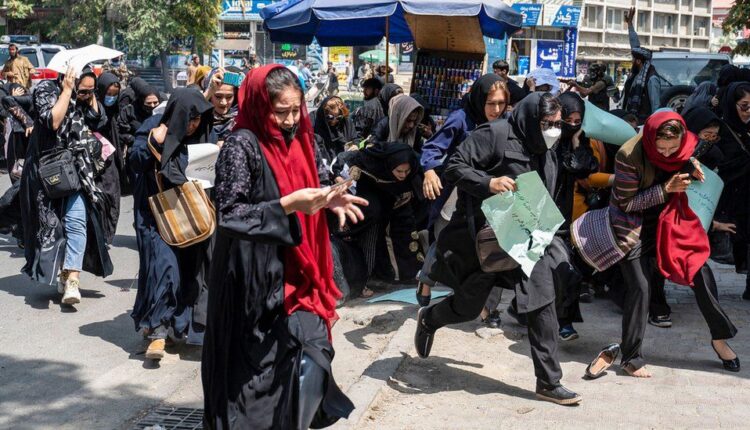 Taliban fighters have dispersed dozens of female protesters in Kabul, almost a year after the militant group seized power.

About 40 women marched through the Afghan capital demanding rights, before the Taliban broke it up by firing into the air.

The fighters seized their mobile phones, stopping one of the first women’s protests in months.

Since the Taliban takeover, women’s rights have been severely restricted.

The protesters chanted demands for “bread, work, and freedom”, carrying a banner reading “August 15 is a black day” – a reference to the day the Taliban captured Kabul in 2021.

“They didn’t beat us much this time,” one of the protesters told the BBC.

“They acted differently than earlier protests [when we were beaten]. They fired shots in the air. Though we’re afraid we came out to advocate for the rights of girls so that at least the Taliban will open schools for them.”

In the year since the Taliban returned to power, they have issued various orders restricting the freedom of women – barring them from most government jobs, secondary education and from travelling more than 45 miles (70km) without a male guardian.

In May, the militants decreed that Afghan women will have to wear the Islamic face veil for the first time in decades.

If a woman refuses to comply, her male guardians could be sent to jail for three days – although this is not always enforced.

There have been minor sporadic protests over the past year, but any form of dissent is being crushed.

Afghanistan is the only country in the world that officially limits education by gender – a major sticking point in the Taliban’s attempts to gain international legitimacy.

Girls have been banned from receiving secondary education, the ministry for women’s affairs has been disbanded, and in many cases women have not been allowed to work.