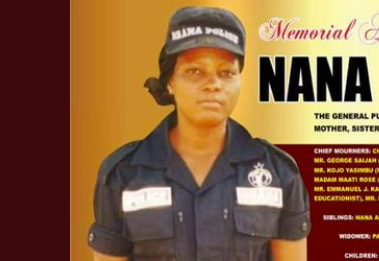 The Acting Inspector-General of Police, Mr James Oppong-Boanuh has promoted posthumously Corporal Agatha Nana Nabin to Sergeant in recognition of her act of bravery, dedication, and commitment to duty.

The Policewoman Corporal was murdered while on snap check duty on the Kumbugu road at Tamale on 30th July 2019.

Her funeral will be held Saturday, August 24 at the Holy Cross Parish Choggu in Tamale.

Sergeant Agatha was aged 30 and was married with three children.

The Policewoman is the third officer to have been killed in the line of duty in recent months.

Two Police officers were killed at Manso Nkwanta in the Ashanti Region and Akyem Swedru in the Eastern Region, respectively between 6:00 pm of Monday 19th August 2019 and 6:00 am of Tuesday 20th August 2019.

The Acting IGP has assured that the murders would be investigated swiftly and the culprits brought to justice.