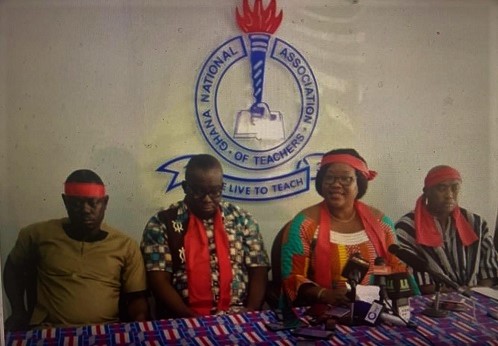 Four teacher unions in Ghana have declared an indefinite strike over the government’s inability to settle their Cost Of Living Allowance (COLA).

The unions declared the strike Monday morning (4 July 2022) at a press conference in Accra, following unsuccessful resolutions between the interested parties.

The unions said they had called on the government to grant a 20% COLA to the Ghanaian worker, particularly teachers and educational workers of the Pre-Tertiary Education level, in light of the current economic challenges.

But, according to the unions, the government has been nonchalant to their demands and subsequently failed to meet their 30 June deadline, thus the strike.

The unions explained that the high inflation, and incessant skyrocketing prices of fuel, goods and services, “have eroded the already woefully so-called salary increases granted” to them.

“We wish to unambiguously express our grave concern of the excruciating pain of poverty that has been bestowed on the Ghanaian teacher and Education Workers.

“The Members of the Unions in education can no longer bear the hardship. Even more so, we reject the inequalities of salaries in the public service in the country,” the group said.

They also made reference to Article 36 of the 1992 constitution of Ghana, which states:

“The state shall, in particular, take all necessary steps to ensure that the national economy is managed in such a manner as to maximise welfare, freedom, and happiness of every person in Ghana and to provide adequate means of livelihood and suitable employment and public assistance to the needy.

“The state shall, in particular, take all the necessary steps to establish a sound and healthy economy whose underlying principles shall include the guarantee of a fair and realistic remuneration for production and productivity in order to encourage continued production and higher productivity, the recognition that the most secure democracy is the one that assures the basic necessities of life for its people as a fundamental duty.”