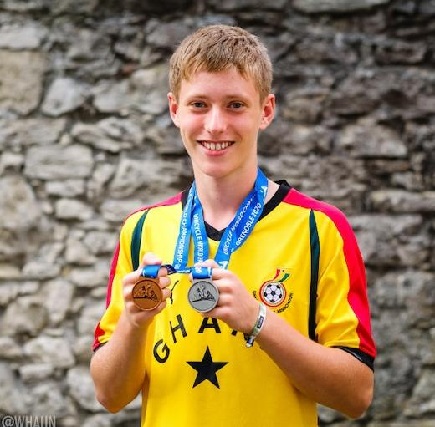 Ghanaian-raised teenager, Trey Haun, has won two medals at the Unicycling World Championship, the nation’s first medals in the competition.

Many Ghanaians on social media have been celebrating the rare achievement at the competition held in France.

His father William Haun tweeted: “This boy of mine took two Unicycling World Championship medals for Ghana – the nation’s first. I couldn’t be more proud of him for all his hard work and perseverance!”

Trey is a US citizen who lived with his family in north-eastern Ghana where his mother was a surgeon at a mission hospital.

He moved there when he was eight years old and lived in Nalerigu “half of my life”, he says, but is now living in the US.

The competition allows athletes to represent their country of birth or residence. This was Trey’s 14th appearance at the championship.

He is competing with his friends from North-East Ghana’s Unicycling Youth team.

This boy of mine took two Unicycling World Championship medals for Ghana – the nations’s first. I couldn’t be more proud of him for all his hard work and perseverance!