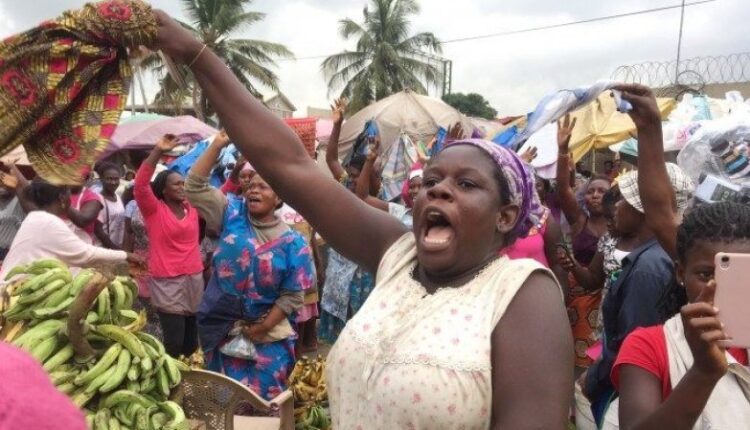 Residents and traders of the Tema Community five market, have organized a peaceful demonstration, led by Nana Yaw Opoku Danso, the Assemblyman of the area, in protestation against the sale of the market space to a developer.

The traders and residents who were clad in red attire chanted and sang to drum home their displeasure at the alleged sale of the land by the TDC Development Company.

Mr Danso speaking with the Ghana News Agency in Tema during the protest said the task force from TDC visited the market a couple of times to measure the open places and told the traders that the place had been sold.

He said, “we have realized it is something they had planned to do, so if we don’t stand up against them, it might go against us”.

According to him, no official meeting had been held with the Tema West Municipal Assembly and other stakeholders to dialogue with them on the recent happenings, adding that some officials from TDC on Wednesday, November 4th this year, visited the place and told them to relocate their trading activities.

He said the traders and residents wish the issue was just a rumour, saying they would not allow the land to be taken from them without passing through the right procedures such as engaging them.

Mr Yaw Osei Antwi, community five market organizer, on his part said he had information about a month ago to the effect that the land they had been using as a market and lorry park for over 30 years had been sold to an unknown woman.

He said, “on November 4, around 16:30 hours, the task force members from TDC numbering about 20 came to measure the place and told the market women and those that have shops there to vacate the place.”

The traders and shop owners expressed worry at the development as according to them that was where they got their daily bread.

Mr King Odei, an electrician who has a shop in the market said, he had been working there for the past few years and he had nowhere to relocate to if they were to vacate the market square.

The demonstrators called the leaders of the country especially the First Lady, Mrs Rebecca Akuffo Addo, to help them stop TDC from selling the market to help safeguard their livelihood.

Meanwhile, Mr Solomon Abbey, the landowner responding to the issue told the Ghana News Agency in Tema that he bought the land from TDC and duly had the needed documents covering it.

Mr Abbey clarified that his land did not include the market or the car park as was being rumoured and added that, even though he bought the land some years ago, he was now ready to develop it.