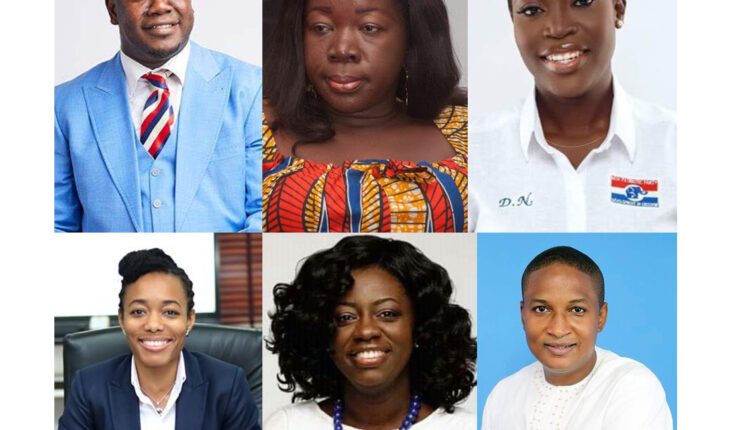 Dynasties in politics are not rare, and Ghana has six of such families producing legislators in the current parliament.

When their fathers were in active politics, some of the lawmakers elected to the 8th Parliament were either resting in a cradle or were toddlers oblivious to the political game of modern governance.

Others were also resting peacefully in the loins of their parents.

But today, they have made their parents proud by stepping into their giant, vacant political shoes to become legislators.

The 8th Parliament of the Fourth Republic boasts of six members who fall within this rare and special group of young politicians out of the 275 MPs.

Four out of the six victorious children are females forming the 40 women contingent in parliament.

Both NDC and the NPP have each produced three of such MPs in the current parliament.

Zanetor, daughter of the late Jerry John Rawlings and  Nana Konadu Agyeman Rawlings is the only one whose father was a former president.

At the time her father attempted the first coup, she was 11 months on May 15, 1979. Her father was successful on the second attempt when she was a year and three days old.

These bloodlines are second generations who have initiated political dynasties, and it remains to be seen if this will be sustained as Ghana’s young democratic governance prevails.

The progenies who were sworn into parliament on January 7 after hours of drama are:

Dr Zanetor Agyeman Rawlings is a medical doctor by profession and represents the people of Klottey-Korle in the Greater Accra Region, on the ticket of the opposition NDC.

It is the second term of Zanetor, who is the first daughter of the late former President Flt. Lt. Jerry John Rawlings and a former first lady Konadu Agyemang Rawlings.

She entered Parliament on the shoulders of her father’s name and lived up to expectations as she is one of the few women who consistently contributed to debates on the floor in 2019.

She made the cut for the Top 10 Most Vocal Female MPs in 2019. This was a research carried out by the political desk of theghanareport.com on contributions by MPs on the floor of the House in 2018.

She was on the Gender and Children Committee as well as the Environment, Science and Technology Committee.

In 2015, a green-horn Zanetor floored experienced and former Minister for Greater Accra Region Nii Armah Ashitey, the then incumbent, at the NDC primaries before winning the 2016 elections.

Among her three siblings, she is the one who has been in the spotlight when her father was in office.

She is the daughter of NPP stalwart Kwamena Bartels. Sheila captured the Ablekuma North seat which was occupied by her father for three terms–1996-2004. Mr Bartels served as minister of several ministries under the Kufuor administration.

Under her father’s guidance, the young politician floored the incumbent MP for the constituency, Nana Akua Owusu Afriyie in their party’s primaries with a result of 518 to 315.

She was elected over Ashley Mensah Winifred of the National Democratic Congress and Princess Agyemang Awuku of the Ghana Union Movement.  She garnered 54, 544 votes out of the 85,392 valid votes cast. Her competitors from the NDC and GUM had 29,772, and 716 respectively.

During the 2016 campaign, the MP-elect formed the Hope Campaign in her constituency to mobilize the youth in buying into the NPP’s ideas.

He is the NDC MP for Adentan Constituency.

He is one of three children of Ahmed Ramadan, a former chairman of the People’s National Convention (PNC).

In the 2020 elections, Ramadan defeated the incumbent MP, Yaw Buaben Asamoah, with 53,275 votes against the NPP Director of Communications’ 41,691 votes.

It was a case of a renewed rivalry as Ramadan lost to Buaben Asamoah in 2016.

She is the daughter of Victor Newman, a founding member of the NPP.  Naturally, it was easy for her to join her father’s party when she developed an interest in politics.

She rose to become a polling station women’s organiser in the Okaikoi South Constituency and later decided to contest the seat in that area.

Under her father’s direction, she beat the incumbent Ahmed Arthur, winning by 440 to 327 votes at the party’s primaries.

The project management consultant won convincingly by accumulating  40,393 votes, against the NDC’s Abraham Kotei Neequaye who polled 26,019 votes at the 2020 parliamentary elections.

Unfortunately, Mr Newman could not live to celebrate the achievement of his daughter.

He died just two days after Dakoa emerged victorious at the 2020 polls.

The lawyer is the NDC MP for Techiman North.

The same seat was occupied by her late father, Isaac Kwadwo Adjei-Mensah, from January 1997 to January 2005. He was a Minister for the Brong-Ahafo Region and a Minister of Water Resources, Works and Housing, under the late ex-President Rawlings. 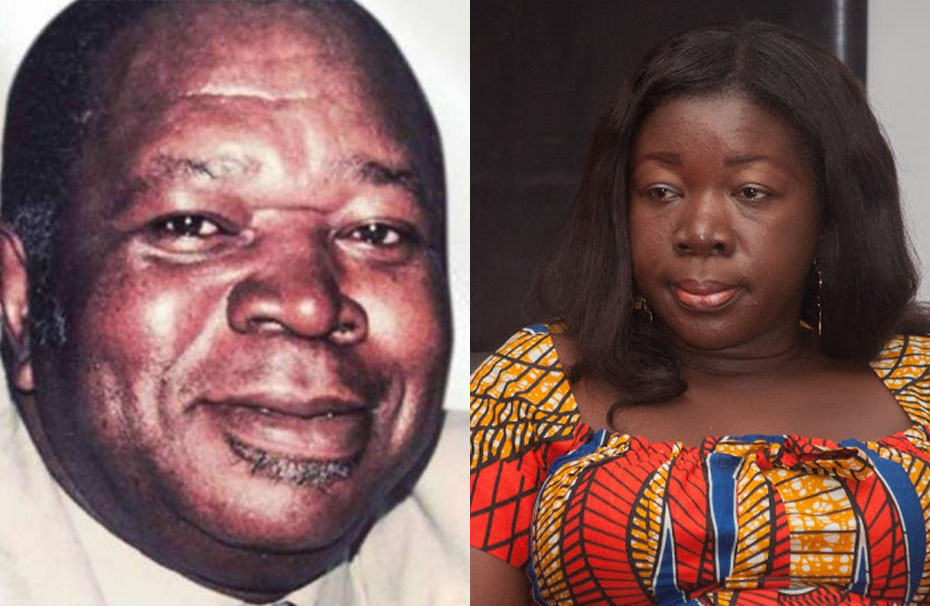 She is the third of 10 female children and a partner at the Holy Trinity Chambers, Kumasi.

During the Mahama administration, she was appointed the minister of the newly created Tourism, Culture and Creative Arts Ministry in 2013.

She went unopposed in the NDC primaries in the constituency and Mrs Ofosu Agyare subsequently defeated the incumbent, Martin Oti Gyarko of the NPP.  She polled 23,252 representing 52.54 per cent against Mr Oti Gyarko’s 21,008 or 47.46 per cent of the votes cast.

During her time at the ministry, she advocated made-in-Ghana clothing as “Wednesday Wear” in addition to the existing “Friday Wear”, to promote as a means of promoting indigenous fashion.

She was the Legal Aid Officer at the Legal Aid Scheme in the Ashanti Region. She is married to Mr Lawrence Ofosu-Agyare, the Health Services Administrator at the Kwame Nkrumah University of Science and Technology (KNUST).

She is also a product of the Kwame Nkrumah University of Science and Technology (KNUST) Kumasi where she studied and obtained a Bachelor of Arts Degree in Social Sciences.

Umar Farouk Aliu Mahama is the NPP MP for Yendi.

Farouk was declared the winner in the 2020 elections after getting 40,624 votes against his closest contender Alhassan Abdul Fatawu of the National Democratic Congress (NDC) who had 24,755 votes.

Prior to that, he gained 244 votes against Abibata Shanni Mahama Zakaria, a Deputy Chief Executive Officer of the Microfinance and Loans Centre (MASLOC), and Baba Daney, a Chartered Accountant who got 210 and 139 votes respectively in the NPP primaries.

He is married to Ayisha Mahama and blessed with two sons.

In contrast, other notable children attempted to get into parliament but failed in their bid.

Samia Nkrumah is the daughter of Ghana’s first President Dr Kwame Nkrumah. She was a one-term MP for Jomoro from 2009 to 2012.

Samia attempted a comeback in the 2020 elections in the constituency but lost to the NDC’s Dorcas Affo-Toffey.

She was also defeated in 2016 at the presidential primaries of the CPP. She had ambitions to lead the CPP, which was founded by her father, but she lost to Ivor Greenstreet.

She contested the NPP primaries in that constituency but lost to Public Relations Officer for the Ministry of Education, Mr Vincent Ekow Assafuah. Subsequently, Mr Assafuah won the seat in the NPP stronghold in the 2020 elections.

Dr Donkor, a presidential staffer, incurred the wrath of NPP supporters after comments described as denigrating.

Responding to a colleague on Facebook who posted that: “As a general rule; I don’t engage party foot soldiers!!”, the presidential staffer said: “you shouldn’t reason with them. It’s like tribalists.”

Her comments sparked condemnation from a section of NPP supporters who felt she had disrespected them.

She later retracted and apologised.

For some children of politicians, they were able to ascend to the highest office of the land as presidents beyond serving as MPs.

Only two people are in this class.

In line with Ghana’s constitution, Mahama, who was Vice-President became President of Ghana on July 24, 2012, on the death of his boss, John Atta Mills. Mahama also won the December 2012 elections to serve a four-year term.

President Akufo-Addo also served three terms as MP during the same period as Mr Mahama. He represented the people of  Abuakwa Constituency.

He became President in 2016 after beating Mr Mahama who he lost to in 2012. President Akufo-Addo is serving a second term as President and will end his service in 2025.

A political dynasty can be defined as a succession of people from the same family who play a prominent role in politics.

They are just 3% of Ghana’s legislature, but that is likely to increase in the coming years.

With notable holy matrimonies witnessed in recent past between political figures – within the same parties or different – the country may witness the emergence of more political dynasties in years to come.

A political family, on the other hand, is a family in which several members are involved in politics, particularly electoral politics.

Under this definition, not all the children of politicians can be classified as being from political families as their parents did not stand for national non-partisan elections.

A World Bank Blogs post in 2018 estimated that in India, 10% of MPs were children of former MPs, which is nearly 2,500 times higher than random chance would predict, and over 35% of villages have been represented in the national parliament by at least one dynastic politician.

However, there are few political families, including the Jinapors, Ramadans and Kufuors. In the U.S., there is a political dynasty in every State.

Other unions have been registered, which could potentially evolve into political families.

But before that, presidential staffer Charles Cromwell Nanabanyin Onuawonto Bissue took the lead with a nuptial flight with Deputy Information Minister Nana Ama Dokuaa Asiamah-Adjei who is also MP for Akuapem North in the Eastern region in 2019. That marriage has produced a baby boy.

Outspoken, experienced legislator for Assin Central Kennedy Agyapong has two love children with the fellow legislator for Dome-Kwabenya, Sarah Adwoa Safo and has a potential to form the foundation of another political family.

A Washington Post article in 2015 explained that a child of a senator in the US was 8,500 times more likely to also become a senator.

Whiles a World Bank Blogs post in 2018 estimates said having a politician father raises one’s odds of entering politics by 110 times, more than double the dynastic bias of other elite occupations like medicine and law.

This may not always be so as a 2010 profession or career path survey conducted for Adecco found only 1 in 4 parents actually wanted their kids to pursue the same profession they did.

Considering the survey was almost a decade ago, the dynamics might have changed now.