East Africa is seeing its worst swarms of locusts in many decades. How can these ravenous pests be stopped?

Drawn to an emaciated avocado drooping from a drying mother tree, Esther Ndavu wonders aloud if it will ever mature into the fist-sized oval fruit that keeps city residents going.

Like many others at her farm in Mathyakani village in central-eastern Kenya, this avocado tree has been attacked by desert locusts.

With a wide sweep of her right hand, Ndavu counts about 10 avocado, mango and paw paw trees that are losing their boughs after the infestation.

The locust invasion that swept over farms in rural Kenya from December 2019 has left farmers like Ndavu not only counting crop losses, but struggling with emerging environmental and health problems.

The swarms have been the worst seen in Kenya for 70 years, and experts are concerned that swarms later in the year will be even larger.

Desert locusts, or Schistocerca gregaria, have often been called the world’s most devastating pest, and for good reason. Swarms form when locusts’ numbers increase and they become crowded.

This causes a switch from a relatively harmless solitary phase, to a gregarious, sociable phase. In this phase, the insects are able to multiply 20-fold in three months and reach densities of 80 million per square kilometre. Each can consume 2g of vegetation every day – combined, a swarm of 80 million can consume food equivalent to that eaten by 35,000 people a day.

In 2020, locusts have swarmed in large numbers in dozens of countries, including Kenya, Ethiopia, Uganda, Somalia, Eritrea, India, Pakistan, Iran, Yemen, Oman and Saudi Arabia. When swarms affect several countries at once in very large numbers, it is known as a plague.

The vegetation that grows at the edges of her farm, where she used to collect fodder for her livestock, was also depleted by locusts. With nothing to feed her livestock, she has moved them to a neighbouring village which was spared the invasion.

There, she pays about 100 Kenyan shillings (93 cents/70p) every day to her hosts for her cattle to feed. The manure produced by her six cows remains with the hosts as additional payment.

This locust invasion is more than a challenge. It is a matter of life and death – Esther Ndavu

“I have gone through a lot of challenges growing up as an orphan,” says Ndavu. “But this locust invasion is more than a challenge. It is a matter of life and death because it has left us hungry and confused.”

The toll of defence

In February 2020, local media reported that a swarm covering 2,400 sq km (930 sq miles) was recorded in northern Kenya and could have been the largest on record in Kenya. At Ndavu’s village, the locusts occupied about 20 sq km (7.7 sq miles) of vegetation when they swarmed.

The invasion has taken its toll on mental health in the village of Mathyakani. For more than a week during the infestation, Ndavu’s children could not go to school. They stayed home to help their parents battle the swarm that had landed on their farm.

At first adults used the tools immediately available to drum away the locusts as well as lighting fires and burning vehicle tires, says Ndavu. Children were enlisted to scream at the pests to try to scare them away before the village was able to use pesticides. That drumming and screaming has left a lasting effect on her children.

“Most nights I do not sleep enough,” says Ndavu. “The children wake me up when they begin screaming at night. When I ask them what the problem is, they tell me that they were dreaming that another locust invasion had come to our home.”

Peninah Nguli, a teacher from a village neighbouring Mathyakani, adds women have been particularly affected. Women are typically responsible for crop farming in the region, while men look after livestock. Some women are suffering from throat problems due to the strain of shouting to scare away the insects, says Nguli, while most fear another swarm.

In mid-February, Kenya’s government announced it was focusing its intervention measures in areas heavily infested with locusts in the north. The interventions included manual and aerial spraying of pesticides, followed by deployment of response teams to assess the damage caused by the locusts. That assessment would then help the government come up with a plan on how it would support livelihoods of Kenyans affected by the locust invasions. 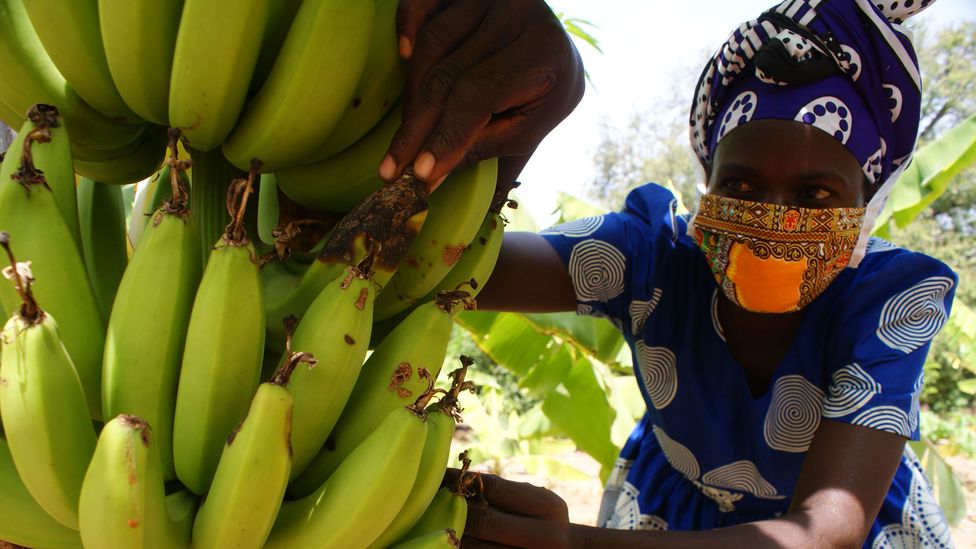 Esther Ndavu inspects her crops. Some of those that escaped the locusts have developed disease (Credit: David Njagi)

Kenya was one of nine beneficiaries of a $1.5m (£1.1m) grant given to the Intergovernmental Authority on Development in April by the African Development Bank to help the East and Horn of Africa battle the locust invasions. In May, the World Bank distributed a further £43m grant to aid 70,000 pastoral households and 20,000 farmers in Kenya to recover from locusts.

One way this funding could be used to help farmers like Ndavu is equipping them with technology so that they can battle new locust infestations, says Moses Muli, a social and conservation expert who has worked with Action Aid, Kenya, for six years.

The first line of defence is chemical insecticides, which can be distributed using packs on the ground, or by aircraft. During Covid-19, this protection has been made difficult or, in some places, impossible because of disruption to the chemical supply chain. And spraying, though one of the more effective methods, comes with drawbacks: the substances used can be harmful to the environment and to human health.

Alternatives include the use of drones and electrified metal grids to control locust swarms. Drones can be navigated to fly low enough to spray chemicals and do surveillance, without the need for larger planes with human pilots. Electric grids can be dragged over fields to generate vibrations in open fields to scare away the locusts and shock any that it comes into contact with. While early tests of the grids have been successful, they may be better suited to smaller swarms. 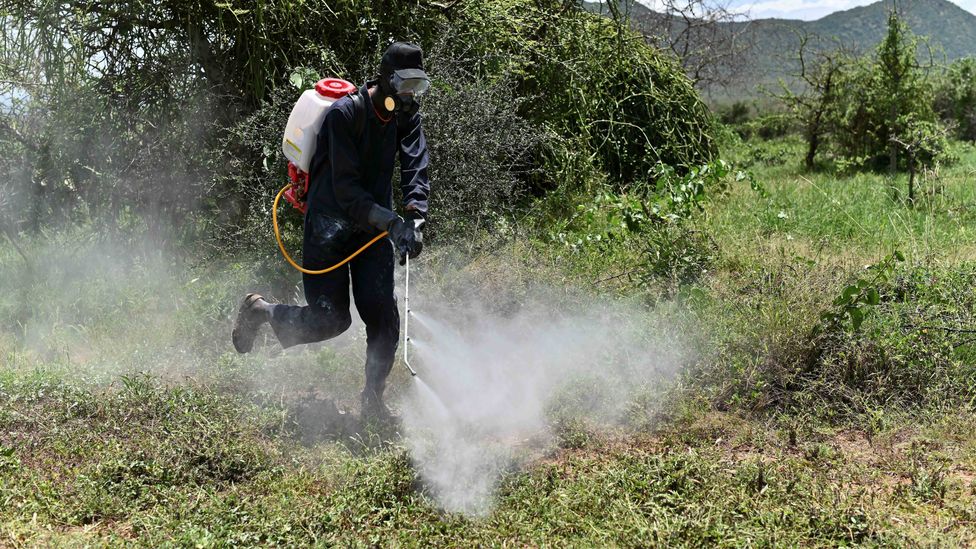 Spraying fields with pesticides can be an effective way to kill locusts, but getting chemical supplies in 2020 has been difficult due to Covid-19 (Credit: Getty Images)

Another option is to use “biological pesticides”, based on the fungus Metarhizium acridum that infects and kills locusts. Fungus-based pesticides are thought to be harmful to a much narrower range of species than conventional pesticides, and so pose less risk to the environment and people.

However, some researchers have questioned whether fungal deterrents could also harm other species of insect, such as termites. They also take longer to kill the pests than conventional pesticides, which risks greater crop damage.

But some of the key protection comes before the swarm arrives. Remote weather alert stations within farms could also help farmers prepare for future locust invasions. Locust swarms usually happen when a prolonged drought is followed by heavy rains, says Muli. Remote weather stations could help to capture data that reveals such weather variations and gives farmers time to start spraying early.

For Munyithya Kimwele, a farmer in Mathyakani, investing in forecasting is the best option for families to be prepared for future locust swarms. “Long ago traditional forecasts would help villages prepare for locust invasions. This is the best intervention the government can give to poor farmers like us,” says Kimwele. 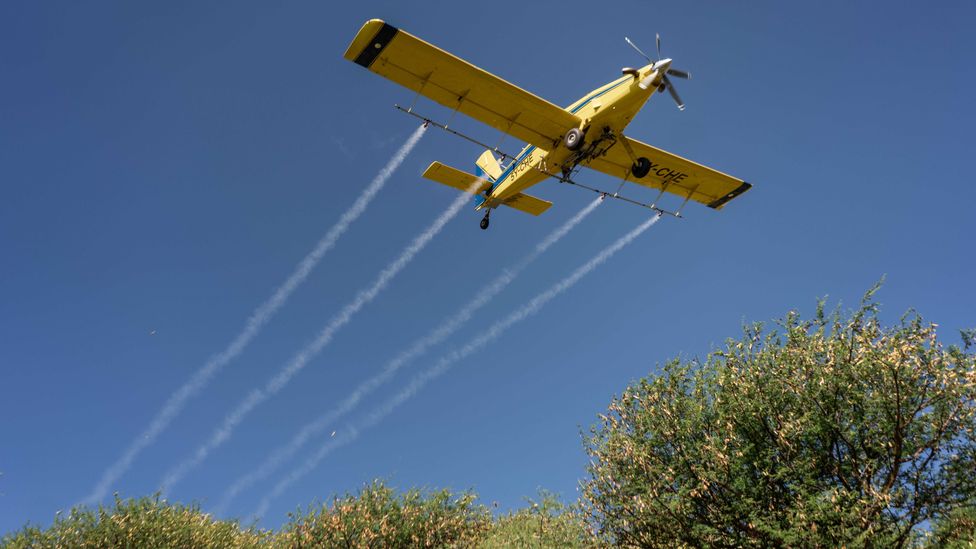 Kenya’s efforts in tackling locusts have been focused in the north of the country, including flyovers by pesticide-spraying planes (Credit: Getty Images)

In villages like Mathyakani, which has not been a priority area for spraying or government assistance, farmers are taking steps towards recovery by diversifying their crops. Instead of relying on traditional crops like maize and cowpeas, which are more vulnerable to locusts, a growing number of farmers are investing in fruit and vegetables.

The locusts are not likely to go away soon. This is because of erratic weather, which has led to prolonged rains is providing the pests with enough vegetation to keep them fed and breeding – Ezra Kipruto Yego

This has been made possible by village irrigation projects that Action Aid Kenya, in partnership with some farmers, established there in 2009. About 40 families along the seasonal river Enzio enlisted with the project, which helps them grow cabbages, tomatoes, kale and capsicum, among other crops by sinking a series of boreholes along the river. This group is not as worse off after the locusts as farmers who had only grown maize, green grams and cowpeas, says Nguli.

“Hungry families from neighbouring villages come to us for help and we give them food,” says Nguli. “We also train them on how to take advantage of the irrigation project and establish kitchen gardens to guard them against future food shocks.”

Yego sees a possible link between climate change, extreme weather events and locust swarms in East Africa. For example, when last year’s cyclones in the Indian Ocean made landfall, they may have created an attractive environment for locusts to swarm into the region from their nesting sites in the Middle East, he says.

“The locusts are not likely to go away soon. This is because of erratic weather, which has led to prolonged rains is providing the pests with enough vegetation to keep them fed and breeding,” says Yego. 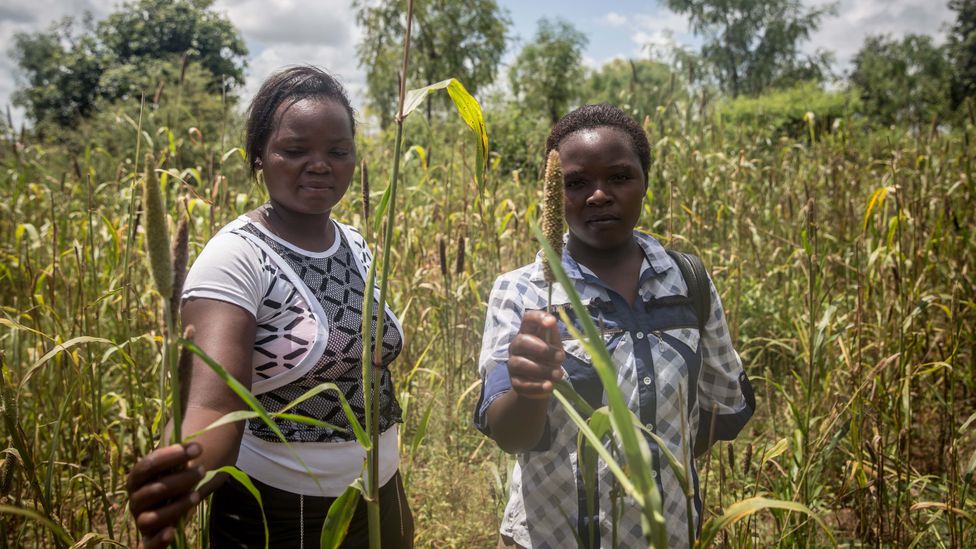 Farmers across East Africa have had crops devastated by the desert locust, with millions facing acute food shortage in the second half of the year (Credit: Getty Images)

Another major challenge for controlling locusts in east Africa is political instability. For instance, Yego says, UN agencies that have committed to fight the swarms rarely risk taking their personnel to countries like Somalia, which experiences frequent attacks from al-Shabab militants.

Hence, when a country like Kenya makes headway in containing locusts, those that have bred and hatched in less politically stable countries often swarm across borders. That makes international peacebuilding and political stability a key part of dealing with locusts, says Yego.

Until such large-scale international solutions are possible, the people of Mathyakani are working hard to adopt and build post-locust resilience, says Ndavu. But all the while there is the threat of another swarm. The locusts of the most recent invasions laid eggs in the area, which could hatch later in the year close to harvest time.

People have lately seen locust hatchlings hopping around the village. They spray them with pesticides, and sometimes they die and disappear.

“I know this is not over yet,” Ndavu says.

US Secretary seeks Sudan breakthrough before US presidential election