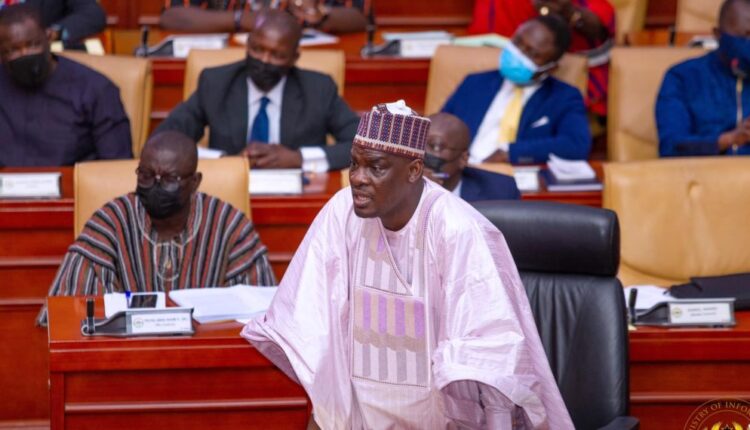 The Minority Leader Haruna Iddrisu, has described the 2023 budget presented by the finance minister in parliament today as ‘eka mpe dede budget’.

The Akan phrase literally means that ‘debt does not like noise’.

Speaking on the floor of parliament after the budget presentation, Mr Haruna Iddrisu said; “Mr Speaker, today we heard the honourable minister for finance before this august house, declare Ghana a debt-distressed country.

“This budget is ‘Nka mpe dede’ and therefore, he’s put the country on the path of debt restructuring which he has announced as a debt exchange programme.”

The minority leader also called out the finance minister for excessive borrowing.

“Mr Speaker, my greatest expectation of the minister is to regularise his borrowing under the amended bank of Ghana Act of 2016.

“You have to come back to this house to seek our mandate and authorisation for your excessive borrowing from the bank of Ghana,” he added.

According to him, Ken Ofori-Atta has only confirmed that Ghana’s economy is now on life support

Meanwhile, Member of Parliament for Ajumako-Enyan-Esiam, Cassiel Ato Forson has said that the government’s debt exchange programme as captured in the 2023 budget statement is actually debt restructuring that is being embarked on.

In the budget statement, the Finance Minister noted that “despite the heightened debt levels, Government remains committed to ensuring that the debt is brought to sustainable levels over the medium to long term.

“To this end, we will implement a debt exchange programme to address the challenges identified in the portfolio in collaboration with all relevant stakeholders including the Ghanaian public, the investor community and development partners.”

Addressing the media in parliament, Mr Ato Forosn said; “Additional tax will simply mean that the people of Ghana are going to pay or go through excruciating hardship, going forward. Unfortunately, the adjustment that the minister announced did not show us how they intend to cut down government expenditure. The things that he outlined there are nothing but empty.

“What we can see here is that the government is shifting the adjustment programme to the ordinary Ghanaian where the taxpayer will be made to pay more.

He added that; “Government of Ghana has finally announced a Debt restructuring programme as part of the 2023 budget! The Ghanaian public, the investor community and development partners must get ready for a crude HAIRCUT!”