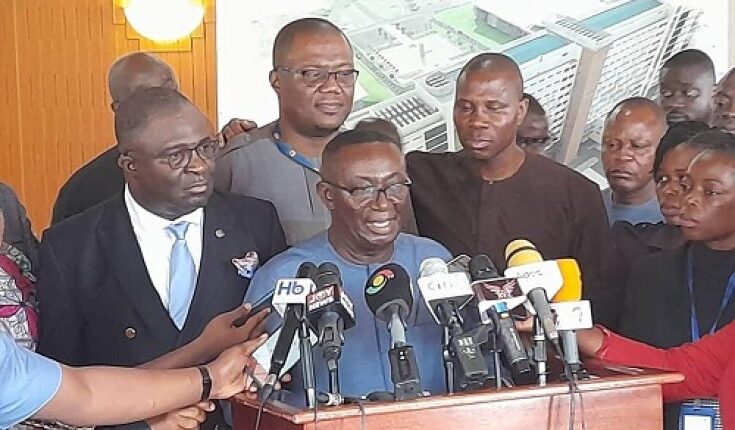 The budget is over, sack Ofori-Atta – NPP MPs tells Akufo-Addo

The New Patriotic Party (NPP) MPs who threatened to boycott the presentation of the 2023 budget have asked President Akufo-Addo to fulfil his part of the agreement regarding the call to sack Finance Minister Ken Ofori-Atta.

The NPP legislators agreed to participate in Ofori-Atta’s budget presentation following a meeting with the executives and Council of Elders of the NPP on Tuesday, November 22, 2022.

But the group are now asking President Akufo-Addo to honour his part of the bargain by letting Ken Ofori-Atta go.

Addressing the media in parliament on Wednesday, November 30, MP for Asante Akyem North, Andy Appiah-Kubi, who doubles as spokesperson for the group, said, “The budget is the budget of the President but pursuant to our position, we agreed with the President to respect a roadmap to address our request, and that means that when we get to the end of it, the President will also perform what we asked him to do.

“We agreed with our president to wait till ABC is done, and we agreed to do that, and now we expect the President also to honour his part of the roadmap.”

Before the budget presentation on Thursday, November 24, the NPP lawmakers threatened to boycott the hearing of the document if Mr Ofori-Atta was the one going to present it.

According to them, Mr Ofori-Atta’s position as Finance Minister in government had become untenable, thus their demand for his resignation or sack.

The Majority Caucus has been calling for the removal of Mr Ofori-Atta over the country’s failing economy.

In a meeting with the President, the MPs had earlier agreed to hold on with their demand until the completion of the International Monetary Fund(IMF) negotiation.

However, a motion of censure brought against Mr Ofori-Atta by the Minority resurrected the calls for his dismissal.

The rebel MPs threatened to absent themselves from parliament on Thursday, November 24, 2022, to boycott the 2023 budget presentation by the Finance Minister.

But, a statement dated November 22, 2022, jointly signed by the Majority Chief Whip, Annoh-Dompreh, and the General Secretary of the NPP, Justin Kodua Frimpong, said, “it has been agreed by all to refocus and recline to the earlier position requested by President Akufo-Addo”.

According to the statement, the party had resolved that the President would act on the earlier demands of the MPs after the 2023 budget had been read and appropriated.