The Hydrogen Economy Is Here With Us

Hydrogen is today enjoying unprecedented momentum. Supplying hydrogen to industrial users is now a major business around the world.

Demand, which has grown more than threefold since 1975, continues to rise, according to the International Energy Agency (IEA).

The world is transitioning from the traditional “hydrocarbon economy” where heating is fueled primarily by natural gas and transportation by the burning of petroleum, to a “hydrogen economy”. The new hydrogen economy is developing as part of the low carbon economy, phasing out fossil fuels and limiting global warming.

The hydrogen economy is an energy system based on hydrogen for energy storage, distribution and utilization. The concept based on a hydrogen energy system was put forward in the 1970s in which hydrogen was proposed as the major energy vector. The concept was conceived because of concerns over the stability of petroleum and gas reserves and the potential lack of stable energy sources. Currently, the interest in hydrogen also centers on its potential as an option for the deep de-carbonization of global energy systems.

Hydrogen is a gas much like natural gas that can be used to heat buildings and power vehicles. However, unlike other liquid or gaseous fuels, when hydrogen is burned there are no carbon dioxide emissions. Versatile and environmentally friendly, hydrogen releases no pollutant such as particulate or carbon dioxide (CO2) when combusted, only water vapour and heat. It can be used to decarbonize electricity, heating, transport and industry. Hydrogen is versatile in the sense that it can be stored, moved and used as energy in a number of ways. It can be transported as a gas in pipelines or in liquid form by trucks and ships.

Hydrogen has a high energy density by weight but has a low energy density by volume. Even when highly compressed, stored in solids, or liquefied, the energy intensity by volume is only 1/4 that of gasoline, although the energy density by weight is approximately three times that of gasoline or natural gas. It was thought of as an energy source of the future. Some critics and proponents of alternative technologies described it as hype, when attention for the hydrogen economy concept spiked in the 2000s. However, proven large-scale and low-emission hydrogen production is already here to kick-start the energy transition.

Following the formation of the Hydrogen Council in 2017, interest in the energy carrier resurged, and its application has advanced beyond serving as an industrial feedstock, primarily for the production of ammonia, methanol and petroleum refining.

The move towards a hydrogen economy is being partly driven by the use of hydrogen in fuel cells. One of the most potentially useful ways to use hydrogen have been found in electric cars, buses and other means of mobility, in conjunction with a fuel cell, which converts the hydrogen into electricity. Fuel cells electrochemically convert hydrogen into water by reacting it with oxygen, typically contained in air.

Fuel cells are attractive because they are far more efficient than the internal combustion engines, though the latter can still be used with hydrogen fuels if desired. Today several manufacturers are releasing hydrogen fuel cell cars commercially, with manufacturers such as Toyota and industry groups in China, Japan and Korea planning to increase numbers of the cars into the hundreds of thousands over the next decade.
In addition to transport, hydrogen may also be useful as a way to store renewable energy from intermittent energy sources – for example, when the wind is blowing but there is not high demand for electricity. In this context, it is an alternative to large-scale batteries or other storage systems. Another possibility is to use hydrogen as a heating fuel in our homes and buildings, either blended with natural gas or neat. Because hydrogen also burns hot, it has become very attractive for companies making products such as cement and steel.

Hydrogen does not exist in its pure form on earth. As a result, energy must be expended to produce it. The production is typically from other compounds such as natural gas, biomass, alcohols or water. In all cases, it takes energy to convert these into pure hydrogen. For that reason, hydrogen is really an energy carrier or storage medium rather than an energy source in itself.

At the moment majority of the world’s hydrogen production is from natural gas using a process called steam reforming. Steam reforming is the reaction of a carbon-based fuel with water to produce a gas mixture of hydrogen and carbon dioxide. Because this production source and process generates significant carbon emissions, this type is known as “grey” hydrogen.

A cleaner version is “blue” hydrogen, for which the carbon emissions are captured and stored under the seabed or repurposed in different ways. Thanks to modern carbon capture and storage (CCS) technology, “blue” hydrogen carbon footprint is relatively small compared to traditional hydrogen processes.

Hydrogen can also be produced from water, using electricity generated from renewable energy sources to split water into oxygen and hydrogen. This is the cleanest one of all. It is referred to as “green” hydrogen, owing to the fact that it produces no carbon emissions. Electrolysis is a convenient and developed technology for splitting water into hydrogen and oxygen and currently produces very pure hydrogen. 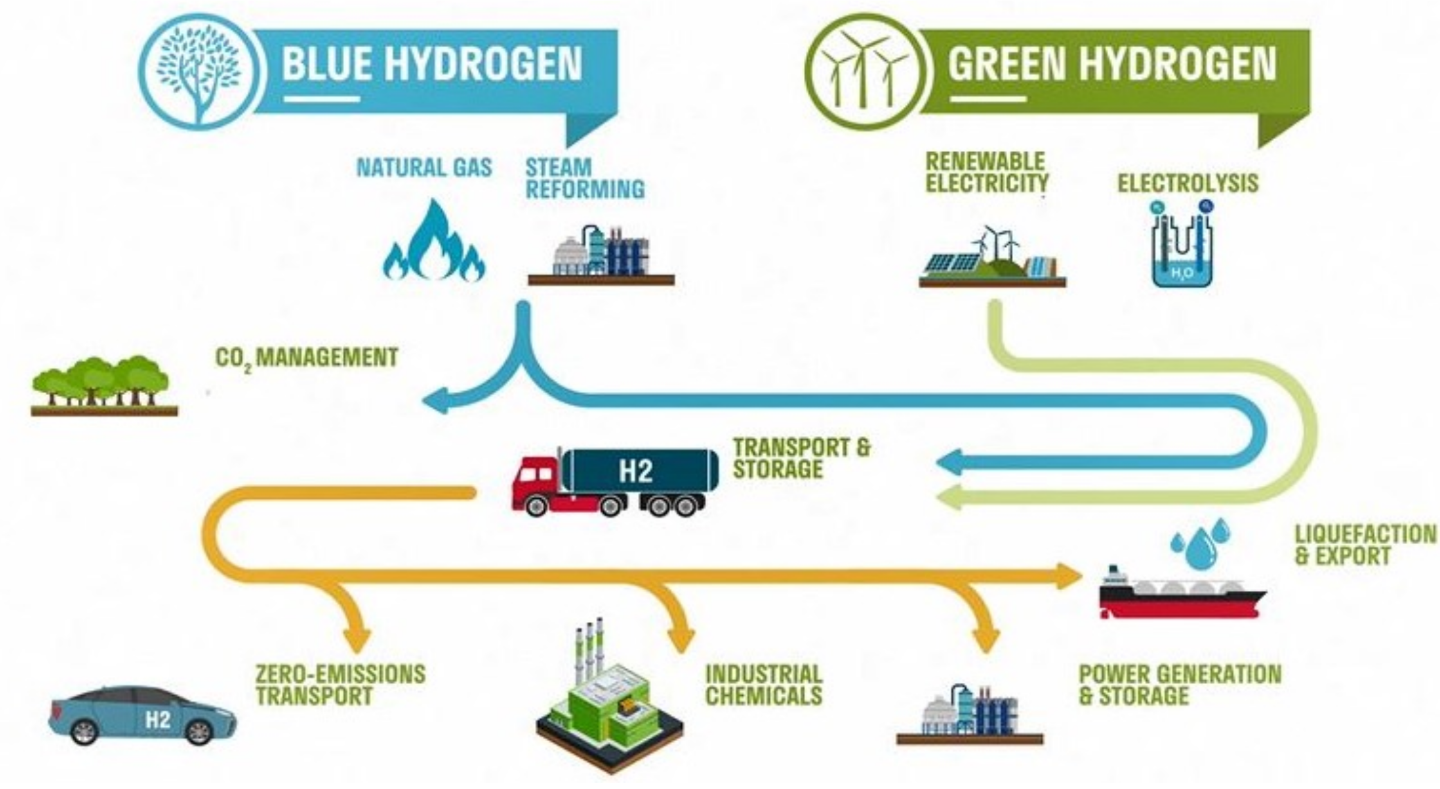 Reforming methane from natural gas, meanwhile, releases carbon into the atmosphere, but is considerably cheaper. At the moment, “grey” hydrogen is cheaper than the other two. Its price is estimated to be around €1.50/kg or €0.045/kWh, according to the International Energy Agency (IEA). The main driver is the price of natural gas, which varies around the world.

The electrolysis process though environmentally attractive, is notably expensive. The IEA states that 1 kilogram of green hydrogen, containing about 33.3 kWh, comes in at €3.50 to €5, which is anywhere between €0.10/kWh and 0.15/kWh. However, the agency sees a growing interest in electrolytic, with declining costs for renewable electricity, and advancement in electrolyser technology.

Costs for producing green hydrogen have fallen 50 percent since 2015 and could be reduced by an additional 30 percent by 2025 due to the benefits of increased scale and more standardized manufacturing, according to IHS Markit. It sees that the price delta is set to close over the next 10 years, due to economies of scale and renewable energy deployment.

“Green” hydrogen is currently enjoying unprecedented political and business momentum, with the number of policies and projects around the world expanding rapidly. The re-emergence of global interest in “green” hydrogen is influenced by the growing pressure on countries to reduce their emissions, along with falling renewable energy costs and emerging export markets.

Europe’s most powerful supranational organization, the European Commission (EU) recently unveiled it highly anticipated hydrogen strategy, revealing how Europe’s top policymakers intend to expand the fuel’s value chain from production to transportation, storage and consumption. The strategy gives a good overall picture of what an emerging hydrogen economy will look like. It will be a much more integrated energy system; one that moves energy among the sectors of transport, industry, and buildings. The strategy gives the example of cars powered by solar panels on roofs, while buildings are warmed with heat from nearby factory, which is fueled by clean hydrogen produced from offshore wind energy.

To help scale up production of green hydrogen in Europe, the EU has launched a Clean Hydrogen Alliance of companies, industry experts, national governments and the European Investment Bank. At the same time, the EU will support the development of a market for green hydrogen by creating a standard classification systems of types of hydrogen and a certification system to support its trade.

Other countries such as the Netherlands, also intend to contribute and profit from the new hydrogen economy. The Dutch are uniquely position with access to the North Sea for the installment of wind turbines and an existing gas network that could be reused for export purposes. North Africa, and Ukraine, with their abundant renewable energy resources, are anticipated to become major suppliers in cross-border trade and export of hydrogen to Europe.

Japan is aiming to get 40 percent of all its energy from hydrogen by 2050. This could amount to almost 38 million tonnes per year, with “green” hydrogen featuring prominently. South Korean and the Chinese governments, are also ardent supporter of nascent clean-energy technologies, and are rumoured to be exploring avenues boosting their fuel cell car market.

The writer has over 23 years of experience in the technical and management areas of Oil and Gas Management, Banking and Finance, and Mechanical Engineering; working in both the Gold Mining and Oil sector. He is currently working as an Oil Trader, Consultant, and Policy Analyst in the global energy sector. He serves as a resource to many global energy research firms, including Argus Media and CNBC Africa