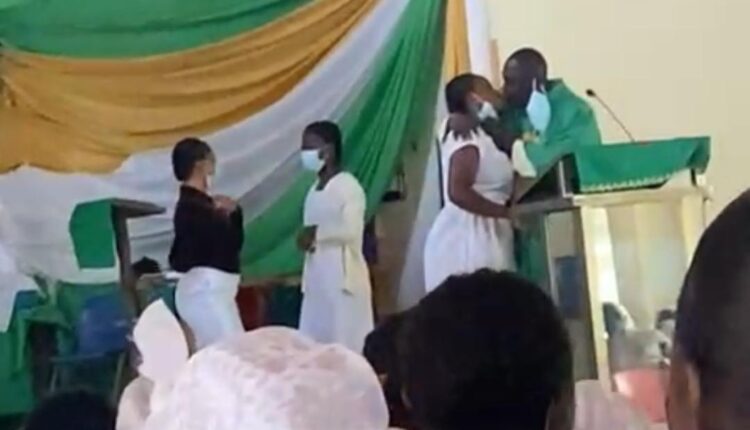 The kiss was to add a human touch; I’m sorry – Anglican priest apologises

The Anglican priest at the centre of the widely-condemned public kissing of three teacher-trainees at the St. Monica’s College of Education, Rev. Father Balthazar Obeng Larbi, has apologized for his actions.

He admits he was wrong and should have acted differently.

“I sincerely apologize to my Archbishop, the entirety of the Anglican Communion, the College, the affected students and their families, and the generality of the public”, he said in a statement.

Rev. Father Balthazar Obeng Larbi, the chaplain and lawyer of the all-female teacher trainee institution was seen in a viral video fully dressed in his cassock, force-kissing three students in turns, in the full glare of a loud audience.

In one instance, he was seen gesturing to one of the girls, who appeared very uncomfortable with the move, to take off her face mask before holding her head and giving her a kiss on the lips.

“ This unfortunate incident happened during a Church Service in appreciation of the Level 300 students, who will be going for their Macro Teaching (Off-Campus Teaching Practice) when college resumes the next academic year, by the College’s Chaplaincy Board.” part of his statement issued on Thursday, August 19, 2021, read.

He noted that the three students seen in the video performed extraordinarily well and were therefore called to be appreciated by him.

“An attempt to add a human touch resulted in the scene in the video,” he explained.

“Accordingly, I am sincerely sorry for my actions seen in the video. I seemed to have taken a number of things for granted. I did not think my behavior through, and I admit that the act and its setting are wrong even in the absence of Covid-19.”

Earlier the church which runs the school issued a statement relieving him of his post as the school’s chaplain and lawyer.

Below is the full statement; 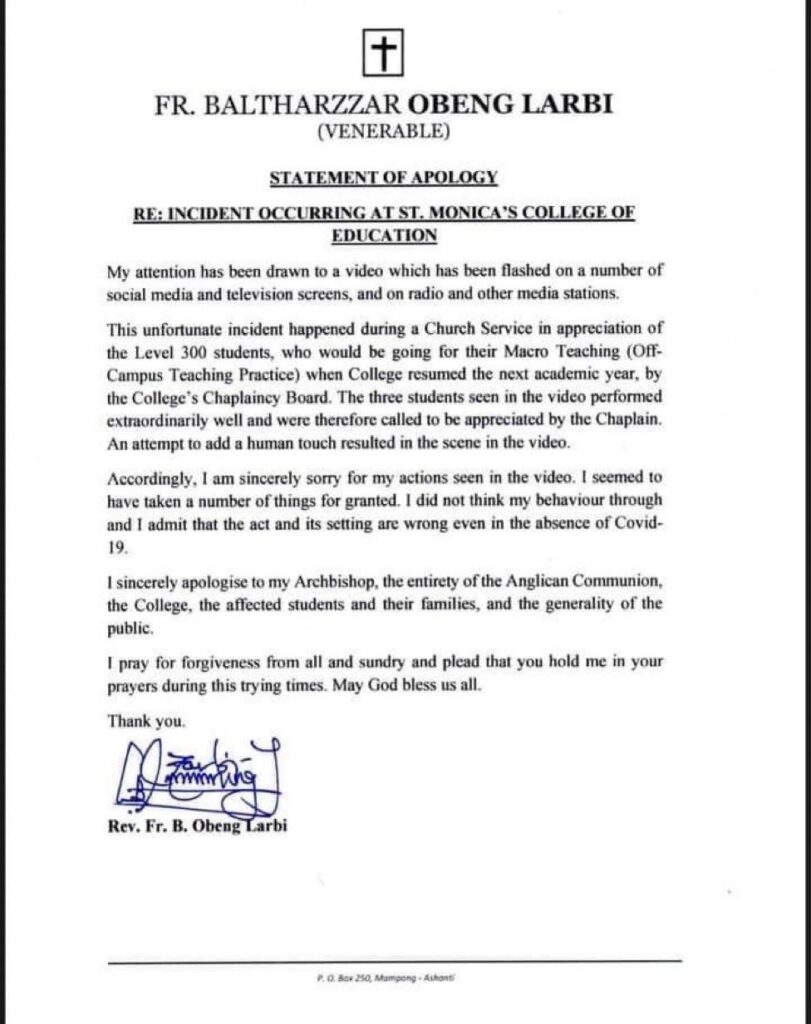 But calls remain from sections of the general public that would like to see the priest face punitive actions for his indiscretions.

Meanwhile, Father Larbi has been relieved of his post as the school’s chaplain. He also ceases to be a lawyer of the school.

His suspension followed a management meeting held to discuss the viral kissing incident, dominating local headlines and making its way into international publications.

Acting Principal of St. Monica’s College of Education, Dr Okyere Korankye, has confirmed the suspension. Additionally, the institution has provided counseling support for the victims as the investigation progresses.

Earlier, the Anglican Church of Ghana expressed its dissatisfaction about the matter and initiated internal investigations.

The church is saddened by the news and wishes to state expressly that thorough investigations have been immediately instituted into the matter and the action of the said priest will be dealt with in accordance with the norms and values of the Anglican Communion where morality is extremely revered in the church,” part of the statement read.