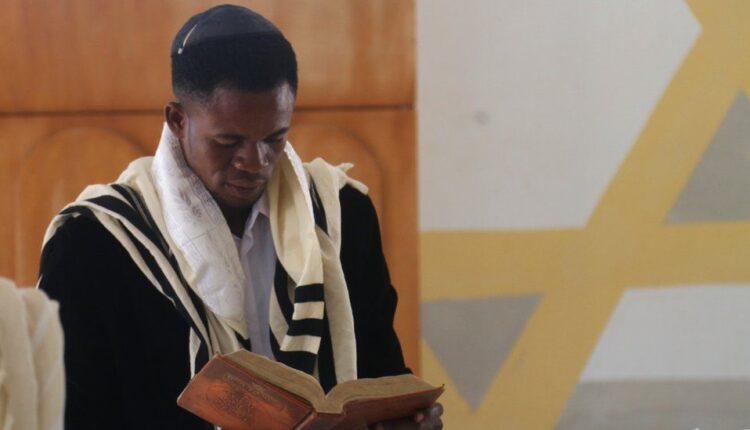 The Nigerians who want Israel to accept them as Jews

Rocking back and forth, Shlomo Ben Yaakov reads from a Torah scroll at a synagogue on the outskirts of Nigeria’s capital, Abuja.

Intermittently his soft mellow voice rises in Hebrew and he is joined by the dozens who recite after him.

Most do not fully understand the language, but this small Nigerian community claims Jewish ancestry dating back hundreds of years – and they are left frustrated by a lack of recognition by Israel.

“I consider myself a Jew,” says Mr Yaakov.

Outside the Gihon Hebrew Synagogue in the suburb of Jikwoyi a table is laid inside a tent built from palm leaves to celebrate Sukkot, a festival that commemorates the years Jews spent in the desert on their way to the Promised Land.

“Just as we are doing this now, they are doing same in Israel,” says Mr Yaakov, as people share traditional cholla bread (baked at the synagogue) and wine from small cups being passed around.

He is an Igbo – one of Nigeria’s three dominant ethnic groups which originates in the south-east of the country. His given Igbo name is Nnaemezuo Maduako.

Many Igbos believe they have Jewish heritage as one of the so-called 10 lost tribes of Israel, though most are not practising Jews like Mr Yaakov. They comprise less than 0.1% of the estimated 35 million Igbos.

These tribes were said to have disappeared after being taken into captivity when the northern Israelite kingdom was conquered in the 8th Century BC – and the Ethiopian Jewish community, for example, is recognised as one of them.

Igbo customs such as male circumcision, mourning the dead for seven days, celebrating the new moon and conducting wedding ceremonies under a canopy have reinforced this belief about their Jewish heritage.