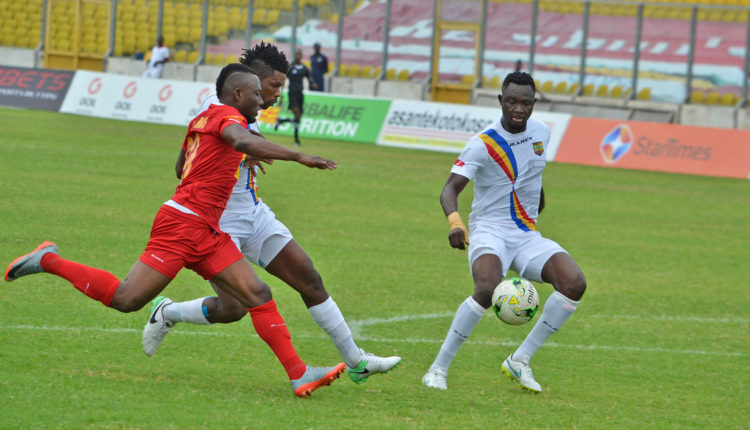 This weekend, football fans in Ghana are sure to be treated to a great spectacle at the Accra Sports Stadium.

Irrespective of where you fall in the divide, this is the game everyone looks out for once the fixture list for the new season is announced.

Calendars are circled and ticked in anticipation for the game that has always lived to its Super Clash billing in our football history. With bragging rights at stake, both teams will be looking to give their fans something to cheer about until the next meeting between the two.

Kumasi Asante Kotoko who started the season very brightly has not had the most favourable of results in their last few games, picking up only three points from a possible nine in as many games.

They also have a small matter of sanctions to deal with from the Ghana Football Association (GFA) which includes playing three successive home games behind closed doors. This was in the wake of crowd troubles in their home game against Berekum Chelsea on Match Day 3. Nonetheless, that is not what this article is about.

The Porcupine Warriors will be looking to get one over their arch-rivals come Sunday and in the process right some of the wrongs that have plagued their camp in the past few weeks.

After losing their first two games of the season and with coach Kim Grant losing his job in the process, Accra Hearts of Oak have found a new level of form. The Rainbow outfit grabbed a crucial point away at Sogakope to WAFA and also launched an impressive comeback to beat Liberty Professionals at Dansoman in their last game.

It is fair to say spirits are at the ceiling level in the camp of the Phobians. Fans of the Accra based side should, however, be wary of the threat posed by their rivals. Considering the fact that Kotoko has had the better of Hearts of Oak in recent times at their own backyard, winning three of their last four visits to the Capital.

With the GFA looking to “bring back the love” among football fans and restore the passion for local games, the build-up to this game have received all the attention it deserves. Anytime Hearts and Kotoko clash it is fair to say the feeling is like Christmas time albeit in football settings.

Reports have it that management of Accra Hearts of Oak is looking to mobilize on their own 20,000 fans to watch the game. The nature of our football and stadia here in Ghana have allowed for a family-friendly environment on Match Days.

Parents will troop into the Accra Sports Stadium not just to watch the game but also to allow their young ones to have a feel of the game and pass onto them the tradition of supporting their local clubs.

From the Americas to Europe and all across the world, there are many Classic football clashes across the world. Real Madrid vs Barcelona, Boca Juniors vs River plate just to name a few. This one, however, is THE MOTHER OF ALL GAMES.

See you on Sunday.

Coronavirus: Locked down under Mile 7 bridge in Accra